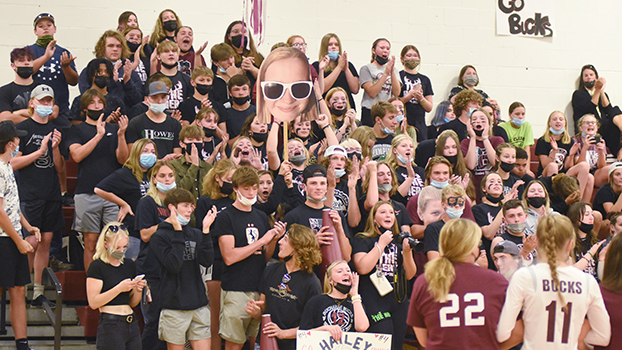 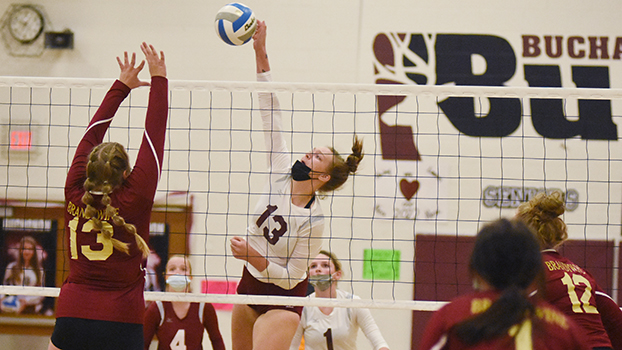 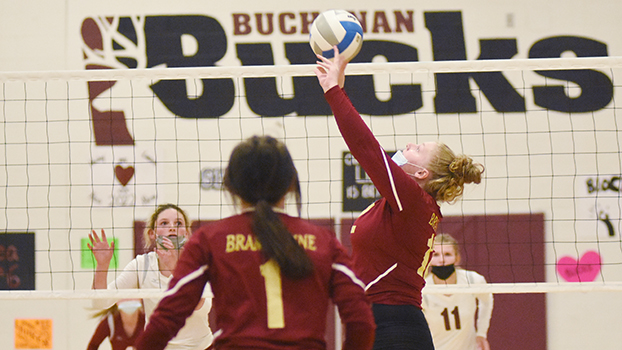 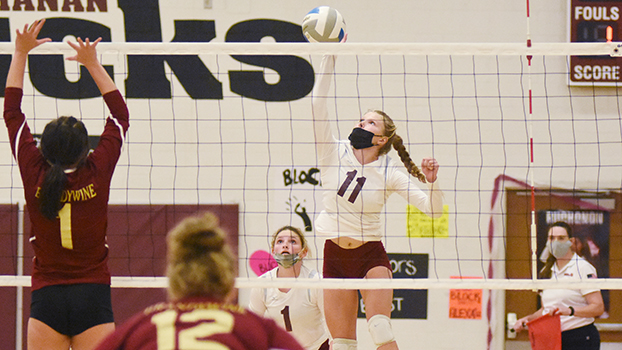 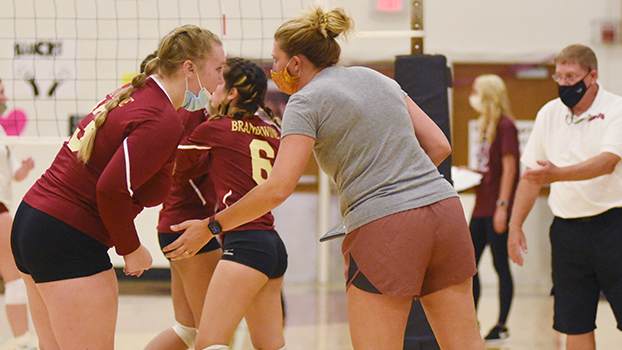 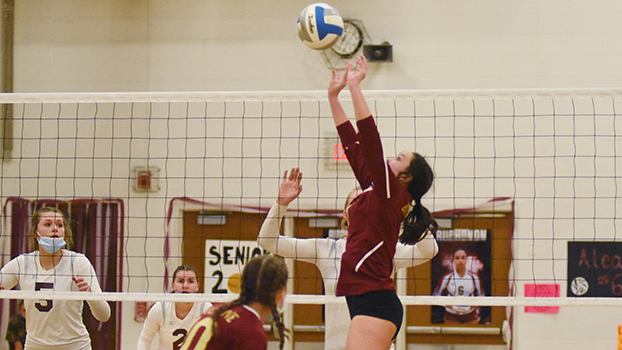 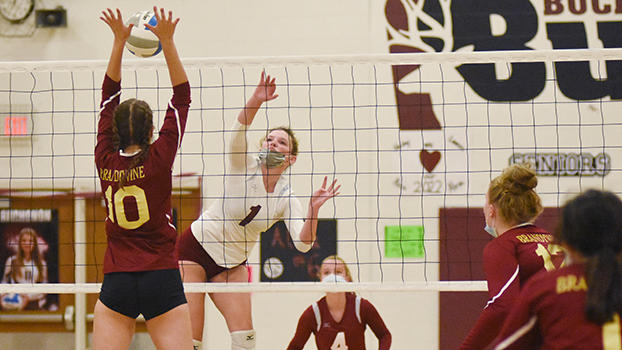 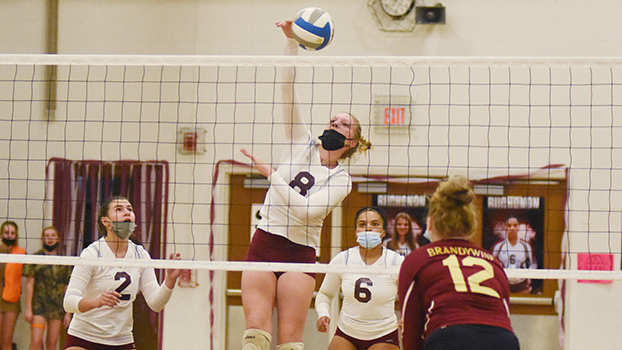 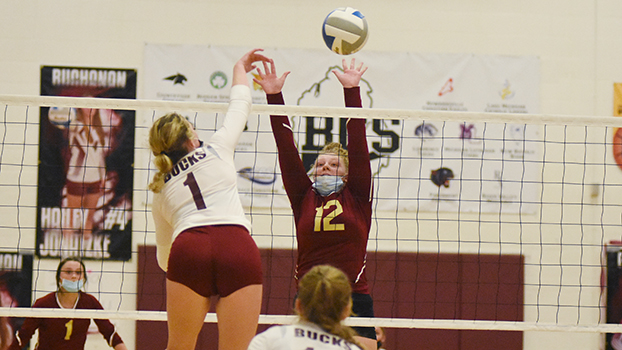 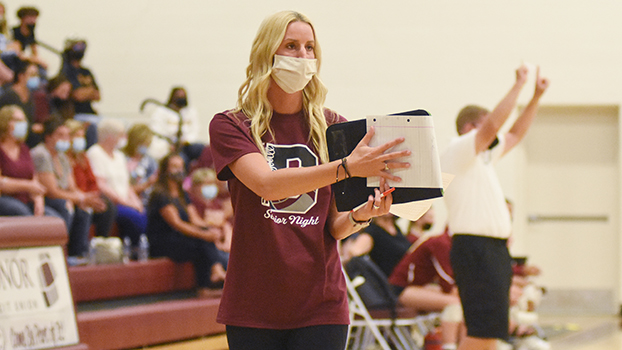 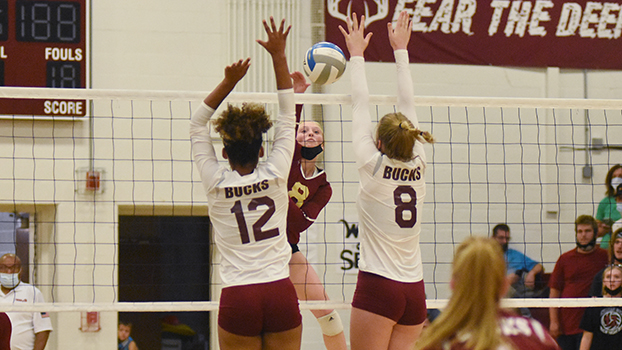 BUCHANAN — The four seniors on the Buchanan volleyball team got a little help from their friends in sweeping arch rival Brandywine in a BSC Athletic Conference showdown Wednesday night.

The Bucks, who won a five-set thriller against Lakeshore Monday night, had to work overtime in all three sets to get the 3-0 victory that improved their overall record to 7-2.

Buchanan seniors Hailey Jonazke, Lauren Strefling, Alexa Burns and Alea Fisher all played a key role in earning the victory, but they got plenty of help from underclassmen Josie West and Faith Carson, especially at the net.

Jonazke led the Bucks defensively with 15 digs from her libero position, while Fisher had six digs and a team-high four aces. Strefling chipped in with three kills, and Burns finished with four blocks.

“It has been a great week for the Bucks,” said Buchanan Coach Shelly Bossert. “I like that we came from behind in a high, stressful environment and still won. I feel like Monday we had the same excitement, but it was a shock to our system because last year we didn’t have fans. It was like this year we forgot what it was like to play with fans.”

Bossert added that she has been stressing playing as a team. Having people in the stands has made a difference.

“It has been really helping having all those fans cheer us on,” she said. “It pumps up people who aren’t on the court. It gets them cheering on the bench.”

Brandywine had a chance to win all three sets, but could not put the Bucks away.

Kadence Brumitt and Haley Scott led the Bobcats with eight and five kills, respectively, while Brumitt also had five aces, eight digs and two blocks. Olivia Laurita had a team-high 10 digs and Elizabeth Stockdale had a team-high nine assists.

First-year Brandywine Coach Emily Zablocki-Kohler said her team still has some work to do.

“We did have a lot of opportunities,” she said. “We played some of our best volleyball of the season. We just have to just trust our gut and go out and play volleyball. Sometimes we overthink things too much.”

Playing such a key conference game so early in the season added to the pressure going into the match, Zablocki-Kohler said.

“Throw in that they added senior night tonight, and that is just one more piece of a big-game puzzle,” she said. “This was only our third weeknight match; everything else has been on a Saturday, that is different too. We just need to find out what works for us. We are getting there.”

The schedule does not get any easier for Buchanan as it heads to Portage Northern for an invitational on Saturday. Play is scheduled to begin at 8:30 a.m.

The Bobcats will hit the court for a few days of practice before returning to action Wednesday when they host South Haven in a BCS Athletic Conference match slated to start at 6 p.m.