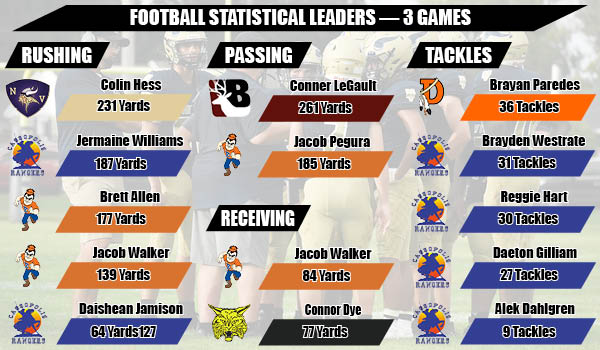 NILES — Following its first loss of the 2021 season, the Niles football team will be looking to rebound against a foe that is very familiar to first-year Vikings Coach Scot Shaw.

Shaw coached the Three Rivers Wildcats for many years and led them to the 2003 Division 4 state championship.

Now at Niles, Shaw is not playing the Wildcat card this week as his team prepares to try to shake off last week’s lopsided loss to perennial Wolverine Conference champion and state powerhouse Edwardsburg.

“I think we have responded very well,” Shaw said about how his team is handling the loss. “We realize that the season goes on, and our attitude toward it must be focused. We aren’t saying much [about my coaching at Three Rivers]. Most of these guys weren’t born when I left there. We have just been focusing on us and what we want to get done.”

Niles and Three Rivers will be meeting for the first time in 70 years. The Vikings won the only previous meeting between the two schools 27-0.

While it may look like Niles took a step backward offensively against the Eddies on the scoreboard, Shaw said that is not the case.

“I don’t think we stepped back at all,” he said. “We saw the execution in the second half against their twos, which presently is a more realistic comparison for us [and really the rest of the conference].”

The Eddies (3-0, 2-0 Wolverine) have been firing on all cylinders the past couple of weeks on both sides of the football field. Edwardsburg has outscored its opponents 154-7.

Still, veteran Edwardsburg Coach Kevin Bartz knows there is more work to do and that his team cannot overlook anyone.

“I thought we made some great strides in our execution on offense,” he said. “The linemen in particular showed a great deal of improvement. We had our best performance of the year, but it is not playoff quality or championship quality yet. We need to be better this week than last week and continue to build on our success.”

The Bulldogs had to rebuild their offense after the graduation loss of standout quarterback Jacob Conklin.

Vicksburg will be trying to snap a seven-game losing streak against the Eddies. The Bulldogs last defeated Edwardsburg in 2014 when they posted a 16-14 win during the regular season, but lost 34-6 in the Division 4 District championship game.

Bartz said that Vicksburg has not missed a beat offensively in replacing Conklin.

“Vicksburg does a great job of developing quarterbacks, and this year is no exception,” he said. “Evan Anderson is another big, mobile quarterback with a strong arm. He has shown on film that he can consistently throw the ball to multiple quality receivers. When coverage is good or upfront blocking breaks down, he has the ability to run and pick up good yardage. We have to limit Evan’s completion percentage and rushing yards to slow down the Bulldogs.”

Thanks to the lopsided score in the first three games, Bartz and his staff have had a chance to develop his team’s depth. 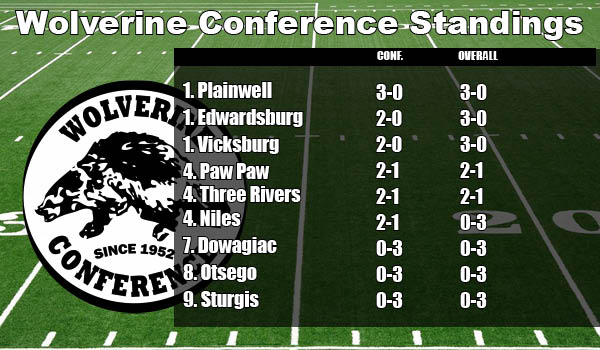 “We have been able to put up a lot of points and limit our opponents to very few scores,” he said. “This has allowed us to get a lot of looks at those second- and third-team players. On field game experience is extremely valuable and knowing how a player will respond in pressure situations. It is something that can’t be learned in practice. Being able to play several players, and even switch some positions around, in a live game scenario has helped us identify kids that we think will help us as we get deeper into the season.”

Having been through the 2020 season in which COVID-19, along with injuries and other disruptions, meant teams had to have players prepared to go at a moment’s notice, Bartz is pleased to be able to get game experience for the entire roster.

Brandywine will make the two-plus-hour trip to Sand Creek, which is southwest of Adrian, for the first-ever meeting between the two schools.

The Bobcats are coming off their first loss of the season. Brandywine was defeated by Saugatuck 42-20 last Friday night. The Aggies (2-1) are coming off a 44-12 win over Pittsford last week. 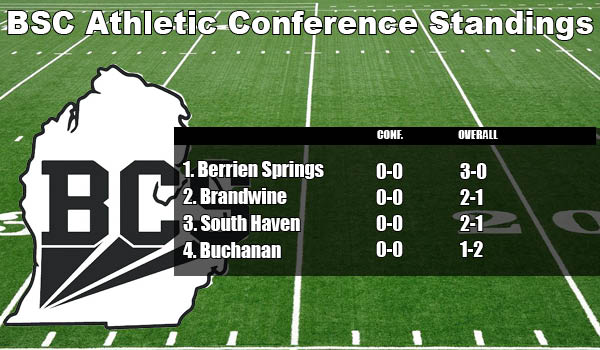 Quarterback Blake Krueger was 11-of-19 for 132 yards and a score. Conner Dye had four receptions for 77 yards.

On defense, the Bobcats were led by Palmer, who had six tackles. Douglas Hawley had five stops and a fumble recovery.

Dowagiac (0-3) is coming off a 43-6 loss to Paw Paw last Friday night, which also dropped the Chieftains to 0-3 in Wolverine Conference play. The Bulldogs were edged by Three Rivers 34-27 last week. Paw Paw defeated Otsego 27-8 in Week 2, while Plainwell defeated the Bulldogs 21-6 in the season opener.

The Chieftains are 12-4 against the Bulldogs since joining the Wolverine Conference in 2006, including a 17-7 victory last season.

In its loss last week at Paw Paw, Malaki Haines rushed for 67 yards on 11 carries, while Justin Bannow had 40 yards on five carries and the only touchdown.

In the loss to Three Rivers, Otsego’s Gabe Cavazos rushed for 189 yards on 26 carries, while quarterback Steven Drewyor was 3-of-10 for 43 yards.

The Bucks are still in search of their first on-field victory of 2021. Buchanan received a Week 1 forfeit from Hartford between dropping back-to-back games to Niles (26-0) and Watervliet (19-13).

Against the Panthers, Buchanan had 201 yards of total offense, including 116 passing as Connor LeGault was 16-of-29 with a touchdown. The ground game was led by Nico Finn, who gained 49 yards on five carries and scored a touchdown.

Trent Till ran for 106 yards on 30 carries and a pair of touchdowns for the Rams in their win over the Tigers. He also forced five turnovers on defense, one of which he returned for a touchdown. 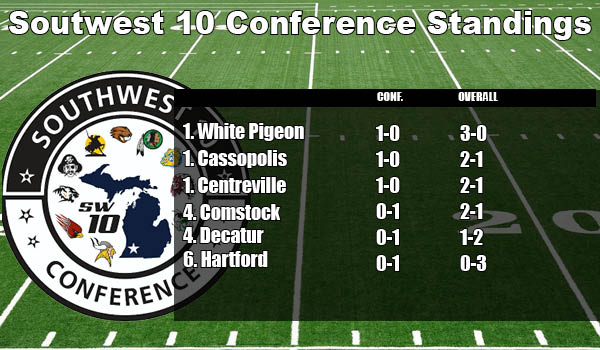 The Rangers hope to remain undefeated in Southwest 10 Conference play as it travels to Hartford, which is still looking for its first win of the season.

Cassopolis (2-1, 1-0 Southwest 10) shutout Comstock last Friday night as it rebounded from its first loss of the season against Brandywine.

The Rangers continued to run the ball well and play stingy defense.

Cassopolis forced fumbles, one on a blocked punt, and an interception, leading to the shutout.

Jermaine Williams remained a force running the ball as he had 67 yards on 12 carries as the Rangers finished with 173 yards on the ground.

The Indians (0-3) are coming off a 71-0 shutout by defending Division 8 state champion Centreville. Hartford, which forfeited its opening game due to a lack of players, was also shut out by Watervliet 49-0.