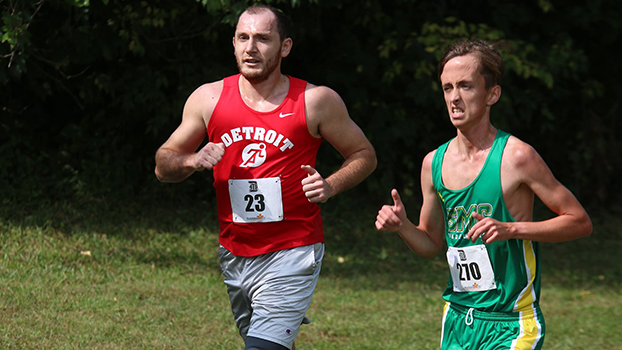 DOWAGIAC — The Southwestern Michigan College cross country team took a step up in competition last Saturday as it competed in the Running Fit-Detroit Mercy Titan Invitational hosted by Detroit Mercy.

The Roadrunner men’s team was third behind host Detroit Mercy, which is coached by former Brandywine standout Guy Murray, and St. Clair Community College, while the women’s team finished sixth.

Oakland University was the women’s winner, while Cleveland State University, Detroit Mercy, University of Michigan-Dearborn and St. Clair County were ahead of Southwestern.

First-year SMC Coach Zac Sartori was pleased with the effort of the two teams against bigger schools.

“The meet was hosted at a very hilly Cass-Benton park in Northville,” he said. “I was very pleased with how the runners competed. Our women faced off against a field of four NCAA Division I teams, an NAIA team, and a fellow NJCAA Division II team (Saint Clair). As a whole, we looked much stronger. Our No. 3 runner took the day to rest and recover from some minor knee pain. Both Ava Hart and Bailee Shambaugh ran much stronger races than the previous week at Oakland.

“Vanessa [Crisenberry] did a great job of pacing and making sure she wasn’t struggling later in the race. Raegan Del Guanto enjoyed her very first cross country race after a week of biking with some hip issues. I’m very proud of all of our women. It’s good to see them improving from one week to the next, and we’re going to keep that momentum going.”

The men’s team was also missing one of its top runners on Saturday.

“On the men’s side, E.T. Saylor is nursing a foot injury,” he said. “We’re hoping he’ll be back to running very soon. In the meantime, Alec Saylor had an outstanding race, along with Alex Blanton, William Westphal and Buster Ward. Others on the men’s side are still finding their early pace and I’m confident they’ll continue to improve as the season progresses. I think we gained a little ground on Saint Clair on the men’s side, but we’ve still got a lot of work to do before the end of the season. Our No. 1 priority right now is keeping the men healthy so that when it comes time to race at regionals, we’ll be ready to show the NJCAA and the MCCAA that we’re here and we’re going to be competitive, right out of the gates.”

The Roadrunners head back into action Friday when they travel to Bourbonnais, Illinois to compete in the ONU Tiger Invitational.