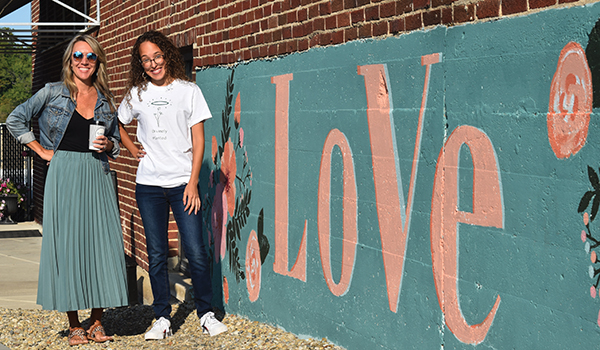 NILES — One corner of downtown Niles just got a little more colorful, thanks to a collaboration between a local business and an area artist.

Work recently completed on a mural outside the Grand LV, 104 N. Third St., Niles. The mural, featuring the word love spelled out in bold letters flanked by floral bouquets, was painted by Niles artist Miah Wells, 26.

“I would say [the mural] is done, but there are still little things I want to tweak,” Wells said, describing herself as a perfectionist. “When you are an artist, and it’s your own work, you always see things you can change.”

Though Wells has only been working on the mural for a few weeks, Grand LV owner Melanie Kennedy said she and Wells had been discussing placing a mural on the business’ side wall since 2019.

“That spot was just concrete. It wasn’t brick, so it was just a weird eyesore,” Kennedy said.

“I thought it was the perfect place to add something. I personally love when I go to a town and see murals and art everywhere, so if we can bring more of that downtown, we want to do that.”

Wells’ design was inspired by the Grand LV itself, and the artist said she knew she wanted to incorporate the logo’s identifiable L and V into the finished work.

“I really wanted [the mural] to go with the theme,” Wells said. “I was inspired by what Melanie has here — the florals and how girly and colorful and youthful it is.”

As the Grand LV is a wedding and event venue, Kennedy said the new mural fits right into the business’ mission.

“Our message is love — it has been from the beginning,” she said.

Already, Wells and Kennedy said they have heard positive feedback surrounding the mural.

“Ever since I first started, people have been stopping by and telling me that it looks good,” Wells said. “It feels big. It’s exciting.”

“She did amazing,” Kennedy added. “I think she did great.”

The mural painted on the side of the Grand LV is Wells’ first, and she said the experience was unlike anything else she has worked on before. Though it was different, the artist said she enjoyed the project and plans to work on more murals in the future.

Until then, both Wells and Kennedy said they hope the community appreciates and enjoys the Grand LV’s new mural.