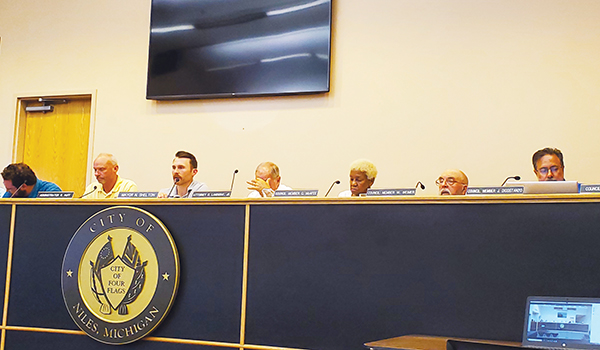 NILES — The Niles City Council got down to business Monday evening.

During its regularly scheduled meeting, the council approved a number of business items, including approving permits for the city’s social district and amending an existing ordinance.

These businesses join Iron Shoe Distillery, the Brass Eye and Niles Brewing Company, which were approved by the council in the spring.

As part of the city social district, the businesses will be able to sell to-go alcoholic beverages that can be consumed by adults within the defined boundaries of the district.

The permits approved Monday still need to be approved by state agencies. Tuesday, representatives with the Nuggett said they hoped to have full approval by late fall.

In other business, the council hosted a second reading and approved amendments to the language in a city ordinance pertaining to water service line installation.

According to Monday’s board packet, the amendments must be made as the state’s Department of Environment, Great Lakes and Energy has mandated that all lead service lines be replaced at the cost borne by the city. The language change allows the city of Niles to replace the estimated up to two thousand lead services in a more cost-effective manner.

The approved language reads: “Water service piping from the water main to endpoint on city-owned or private property shall be new piping of not less than one inch in diameter and made of Type ‘K’ copper, ductile iron or any water service piping approved in the then-current Michigan Plumbing Code.”

Council member John DiCostanzo said he believed there could be an opportunity to use federal dollars on the project.

“I’m not happy that we have to do this, but it’s a mandate from the state,” he said. “It’s a big project, but we have to go ahead and do it, and it will benefit the homeowners who have lead pipes.”