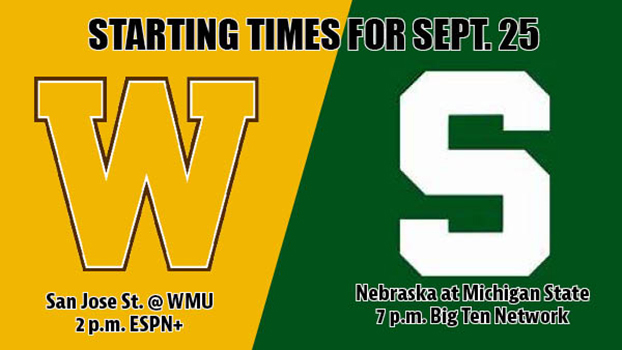 KALAMAZOO — Start time for the Western Michigan football game against San Jose State on Sept. 25 has been announced as 2 p.m.

The game is set to be broadcast on ESPN+. Tickets are available by calling 1(888)4-WMUTIX or visiting wmubroncos.com/tickets.

This will be the first match up in program history between the Broncos and the Spartans.

Western Michigan is on the road at the University of Pittsburgh this Saturday at noon. The game can be seen on the ACC Network and heard live on the Bronco Radio Network.

EAST LANSING — The Michigan State-Nebraska game scheduled for Saturday, Sept. 25 in Spartan Stadium will kick off at 7 p.m., the Big Ten Conference announced on Monday.

The game will be televised on FS1.

This marks the first trip for the Cornhuskers to East Lansing since 2014.