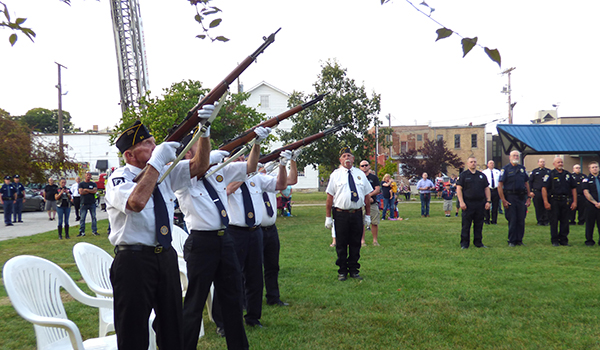 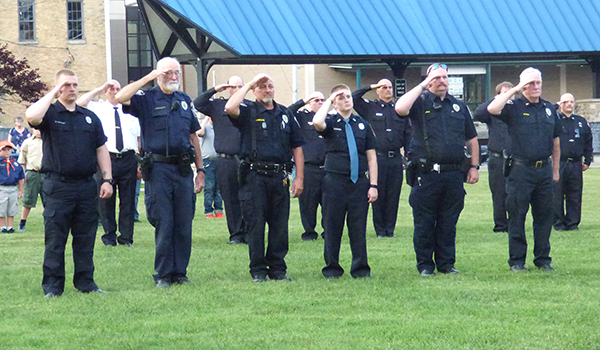 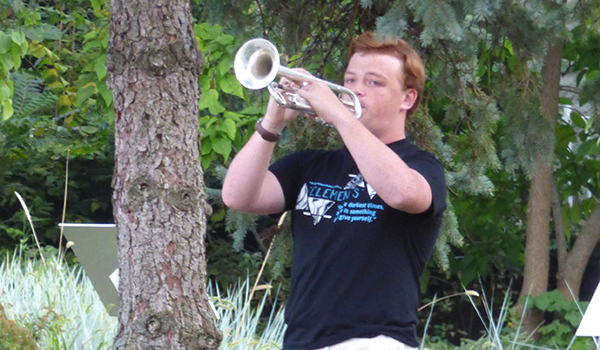 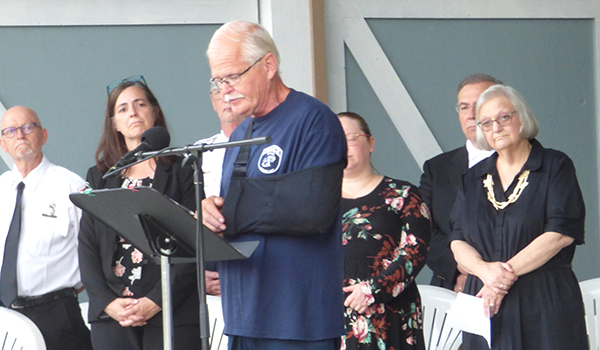 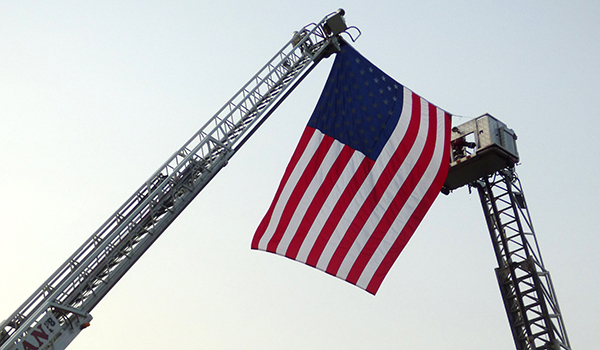 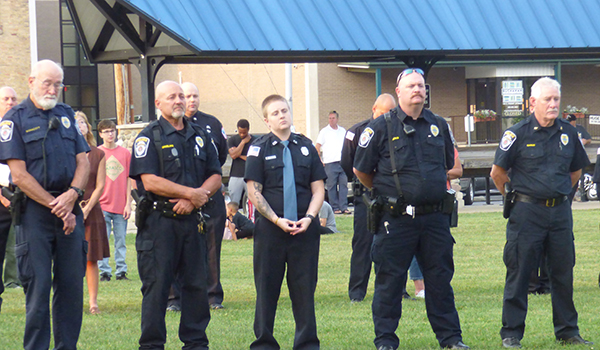 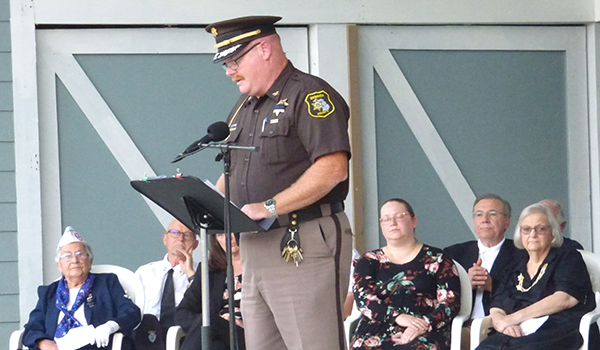 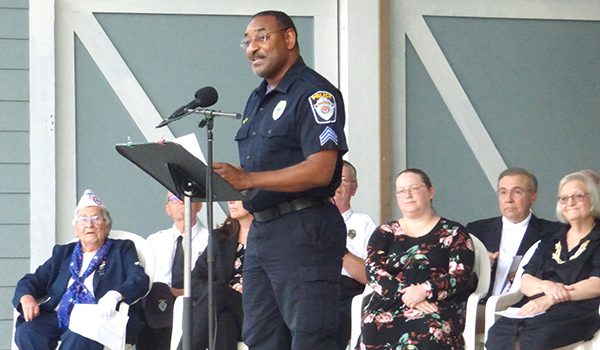 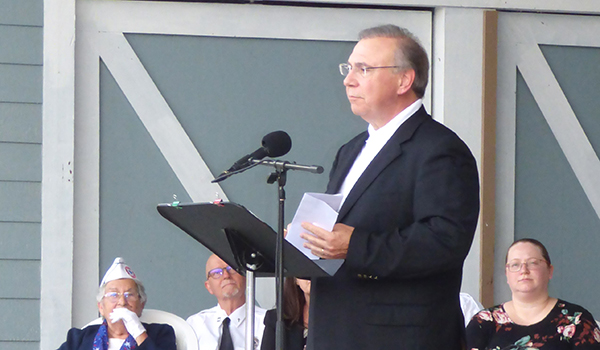 BUCHANAN – “Where were you when the world stopped turning on that September day?” Country singer Alan Jackson’s timeless anthem about the Sept. 11, 2001, terrorist attacks rings just as true today as it did 20 years ago.

Many alive today can vividly remember what they were doing when they learned about the planes hitting the World Trade Center towers and the Pentagon as well as slamming into a Pennsylvania field. They are memories that will stay with them just as memories of Pearl Harbor and President John Kennedy’s assassination stayed with earlier generations.

Memories of that fateful day were on the minds of those attending the annual Patriot Day observance in Buchanan Saturday. Scores of Buchanan residents gathered at the Buchanan Common as they’ve done every year since the night of the Sept. 11, 2001, attacks.

The event was attended by many including River Bend Riders and the AmVet Riders. Also attending were Niles city, Buchanan city, Bertrand Township and Buchanan Township fire departments, the Michigan State Police, the Berrien County Sheriff’s Department and Buchanan city.

Berrien County Board Chairman and Buchanan resident McKinley Elliott was among those speaking at Saturday’s service.

“This 20-year anniversary seems even more poignant especially after what happened last month in Afghanistan,” he said.

“We all remember where we were when the attacks occurred,” he added. “It was a really nice day and I was at the Niles courthouse, we didn’t know exactly what was going on. It was a routine day and I thought maybe I’d have a chance to sneak back home to mow the grass.”

“It became a day that was burned into our hearts and minds forever,” he said. “Unlike Pearl Harbor, the images of the towers being hit were beamed all over the world. We turned on the tv in courthouse office and saw the plane going into the second tower. We couldn’t begin to grasp the horrors of what happened.”

“Then we saw the Pentagon hit and Flight 93 was unaccounted for,” he added. “The passengers on that plane had been informed by loved ones that the nation was under attack. They resolved to act and struck the first blows of the war on terror. We all know what ultimately happened, about those died then and since.”

Elliott noted that God comforts us in times of trouble and spoke of the need for a spiritual renewal in the country. “The events of Sept. 11, 2001, remind us of the uncertainty and brevity of life,” he said. “Those going into the World Trade Center and on those planes that day didn’t know that would be their last day of life. We can never surrender and never forget.”

He was one of several speakers who looked to both the past and to the future during the service. The Patriot Day commemoration also featured performances by the Buchanan High School Band, the firing of a salute by the American Legion honor guard and the Pledge of Allegiance led by Boy Scouts and American Heritage Girls.

Denison thanked Mitchell and others who have faithfully held the Patriot Day service every year including the evening of the attacks in 2001. “I would like to thank everyone involved for continuing the tradition and upholding the promise to never forget,” he said.

“If someone asked me to remember what the weather was a particular day 20 years ago, I’d say they were crazy, but we can all remember that day,” he said. “That day taught us how quickly and permanently lives can change. We need to cherish every moment we have.”

“Secondly, that day taught us that there is still good that happens in the midst of unspeakable tragedy,” he added. “We saw average citizens carrying strangers to safety, people offering water to first responders. We set aside differences and stood united.”

Judnich read a statement from Stabenow, who recalled how Senators and Congressional representatives of both parties gathered on the steps of the Capitol on the evening of Sept. 11, 2001, to sing “God Bless America.” Davis spoke of her organization’s efforts to honor first responders and the military and asked people to remember all who died 20 years ago.

Heit asked people to remember everyone who died that day, especially the first responders. “We come before you with heavy hearts and multiple emotions,” he said. “We mourn the 3,000 who died and we’re humbled by the bravery of the first responders who ran to the danger, they knew what they were doing was extremely dangerous.”

“Each of us can remember what we were doing that day,” he added. “Those events brought us together and as President George W. Bush said today in Pennsylvania, the actions of the enemy that day revealed the spirit of our people.”

“Oh my, how time has flown,” Burnett said. “At 8:46 a.m. that day America would forever change. Do you remember where you were, what you did and how you felt when the world changed? I certainly do, I will never forget. We gathered that day to reflect and remember the lives lost. Perhaps the most important outcome of the painful tragedy was people joining together.”

Mitchell was among those from Southwest Michigan who traveled to New York City in the weeks and months after Sept. 11 to bring comfort to people. “I couldn’t hardly believe that 20 years has passed,” he said. “We met here at the Common to pray that day … There are memorials to that day in communities across the country. We remember not the disaster but what came out of the disaster.”