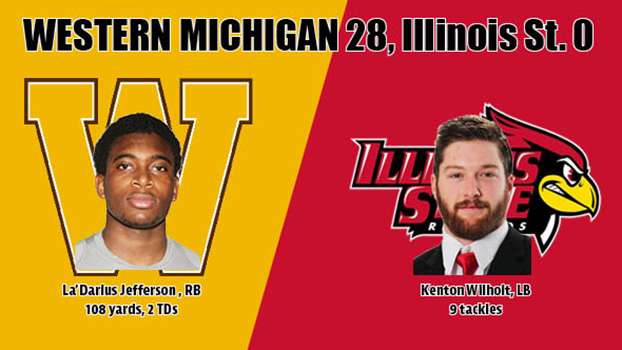 KALAMAZOO — The Western Michigan football team picked up its first win of the season, 28-0 over Illinois State, in a dominant defensive performance at Waldo Stadium in front of 18,122 fans Saturday night.

Not only did WMU’s defense record the shutout, the first since a 68-0 win over Delaware State on Sept. 15, 2018, but the Broncos tied the program record for fewest yards allowed in a game with 57. The Broncos tied the 1972 team that held Marshall to 57 as well.

Western Michigan (1-1, 0-0 MAC) recorded four sacks and eight total tackles for loss on the night, led by linebacker Corbin Moment with three to go with his team-high six tackles. The defense also recorded its first turnover of the season when Bricen Garner intercepted a pass in the second quarter.

Offensively the Broncos racked up 407 yards, with 233 on the ground and 174 threw the air. Junior running back La’Darius Jefferson had a game-high 108 yards rushing and two touchdowns, while sophomore Sean Tyler had 78 yards on 15 carries and one touchdown. Redshirt sophomore quarterback Kaleb Eleby went 15-for-21 through the air for 174 yards and a touchdown. Wide receiver Jaylon Hall led all Broncos with seven catches for 75 yards and a touchdown. Corey Crooms had five catches for 56 yards.

The Broncos received the ball to open the game and marched down the field for a touchdown on a one-yard carry by Jefferson. WMU ran the ball 10 of the 11 plays on the drive that went for 75 yards.

WMU held a 7-0 lead deep into the second quarter when Tyler rushed it in from three yards out to push the lead to 14-0 after a five-play 56-yard drive.

Western Michigan forced Illinois State to punt after the Redbirds opened the third quarter with the ball. WMU got the ball on the ISU 49 and Eleby finished the drive minutes later with a 24-yard strike over the middle to Hall for the touchdown.

Jefferson added his second touchdown of the night to cap off a 12-play 60-yard drive with 1:31 left to play in the third quarter.

Western Michigan heads back out on the road to take on Pittsburgh Saturday at noon. The game can be heard live on the Bronco Radio Network and watched live on the ACC Network.