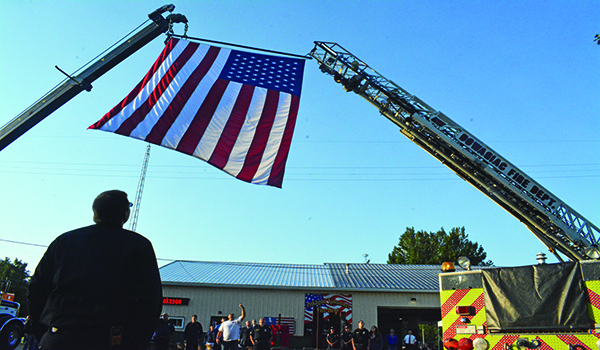 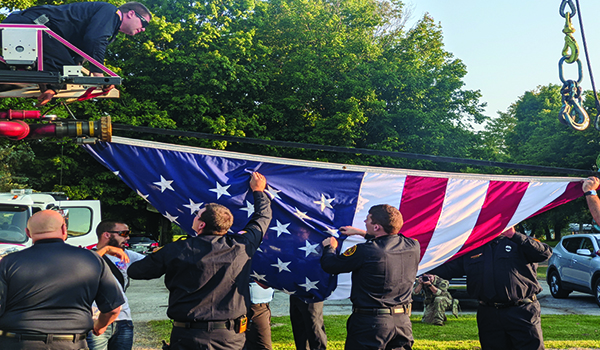 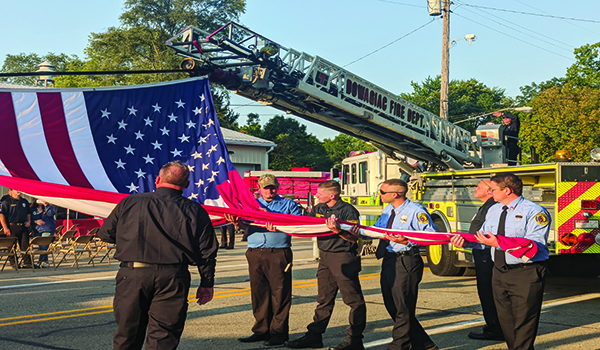 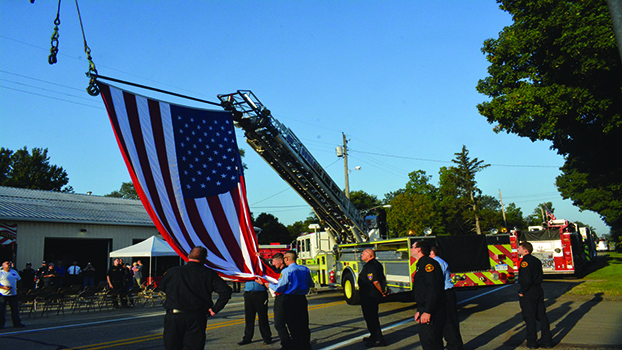 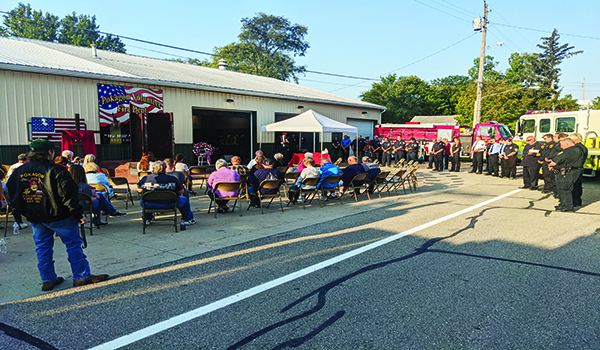 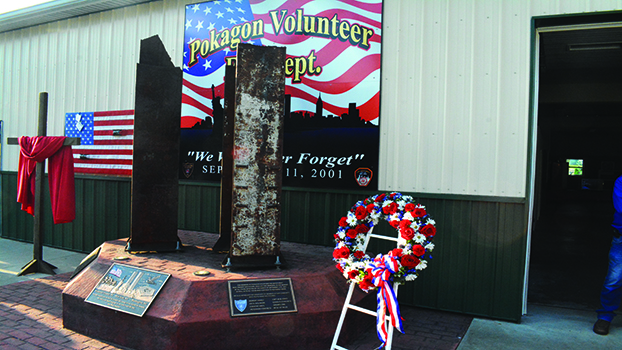 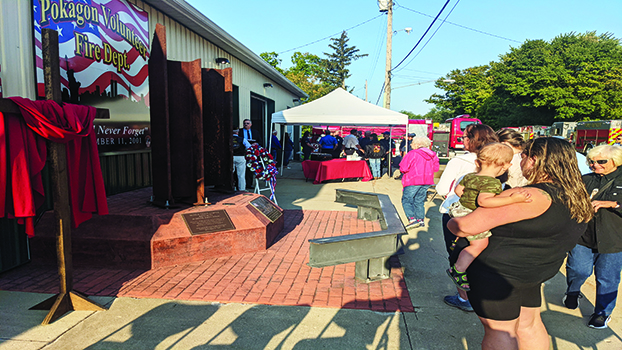 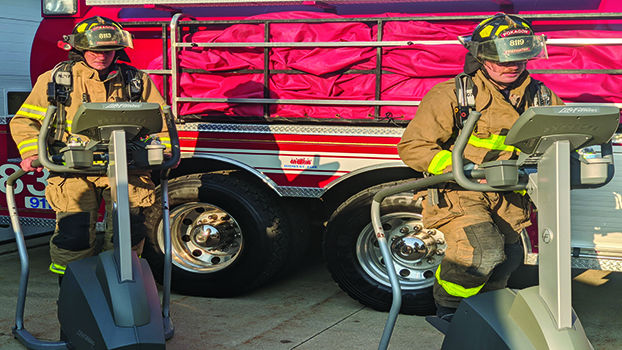 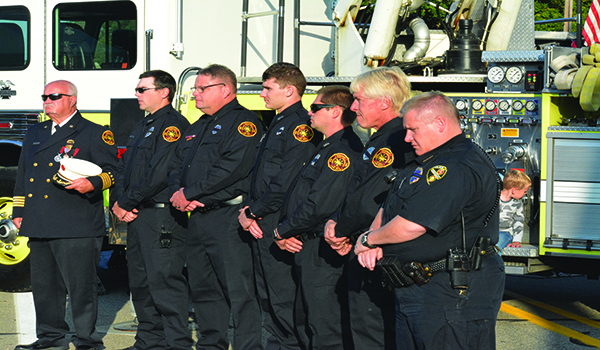 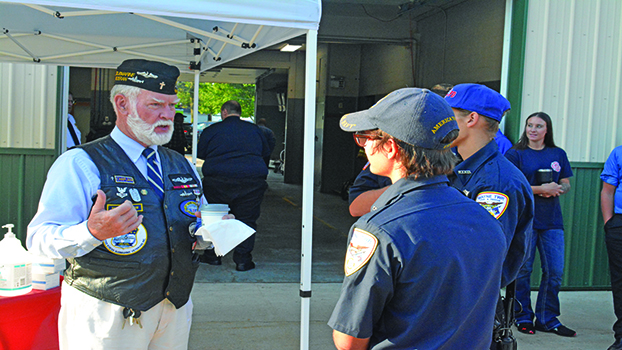 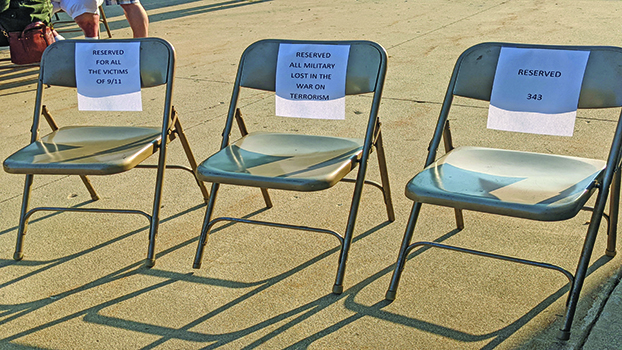 Area first responders and community members gathered at the Pokagon Volunteer Fire Department, 31555 Pokagon Hwy., for a memorial ceremony honoring the victims and survivors of the tragedy.

Chairs for community members arched around the department’s 9/11 memorial monument — a pair of 6-foot-plus steel beams from the World Trade Center taken from the rubble of the New York complex and donated by The Port Authority of New York and New Jersey to the PVFD — as Pokagon United Methodist Church pastor Bill Walters led four moments of silence at the time of each plane crash. In between those moments, those in attendance were free to mingle and interact with the memorial.

A pair of stair climbers were stationed near the monument, which firefighters took turns using to simulate the 110 flights of stairs first responders climbed in the World Trade Center .

PVFD Assistant Chief Joe Dohm remembers the tragedy like it was yesterday.

“I was in my office at first and then I was out and about for the day attending to different clients,” he said. “I remember listening to it on the radio all day. I remember every conversation everyone was having at all of my accounts during the day and the shock people felt everywhere I went.”

Steven Phillip of Pokagon was a sixth grader when the attacks took place. Being so young, the scope of the event was something hard for him and his classmates to process.

“I remember they just kind of came in and told [my teacher],” he said. “Some kids were going home. You didn’t really realize at that age what had happened until you got home, turned on the news and talked to your parents about everything. As life goes on, you learn more and more about it.”

Phillip went on to become a volunteer firefighter for the PVFD from 2007 to 2017. As first responders, Dohm and Phillip have a special appreciation for what the first responders at Ground Zero experienced 20 years ago. A family friend of Philip’s, who was a first responder at Ground Zero, recently passed away from lung cancer caused by exposure at the scene.

“It’s unreal to go up 110 floors,” Phillip said. “To think that they just kept going again and again and again. No one thought the towers would ever come down, it’s unreal. Here we are twenty years later and people are still dying from illnesses related to the attacks.”

“We’re still first responders,” Dohm said. “Even if you aren’t present at an emergency, you’re thinking of how you would handle the situation. You’re also praying for their safety and hoping they can get everything handled safely.

Twenty years later, communities across the country continue to pay tribute to the lives lost that day. Dohm and Phillip, flanked by his two young children, appreciated having an annual ceremony entrenched in the community to serve as a reminder to not forget what happened that day.

“The people who passed away live on in our memories,” Phillip said. “All of the first responders, firemen, paramedics, cops. Countless people. I told my kids what this was about and explained that the planes crashed into the towers and all of the people who died. They asked what the ‘343’ on the flag stands for and I told them it stands for the 343 firefighters that passed away. It’s nice to have something like this in your own area.”

“I think it’s very important,” Dohm said. “It’s just like with Pearl Harbor. It was a very tragic day but I think people need to remember those situations. That way, not only will we be able to honor those that lost their lives that day but if we don’t remember what happened, we’re doomed to repeat it. We have to remember that we’re not immune to these attacks. They can happen, they did happen.”