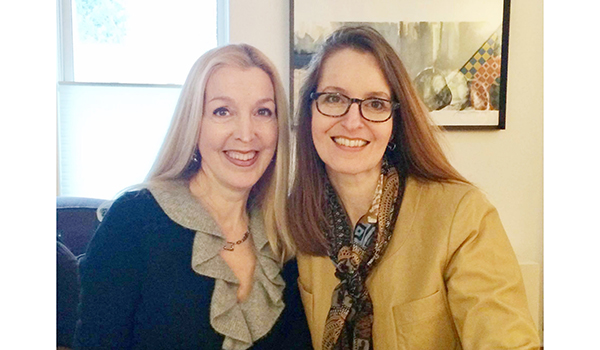 BUCHANAN — Time has not dulled the memories of sisters Monroe and Veronique Lemay.

Though decades have passed, they can still recall in vivid detail what New York City was like on Sept. 11, 2001. They can still smell the burning of ground zero, hear the creaks and groans of collapsing buildings, and feel the grittiness of hot, white ash in their hair.

“It’s not something you forget,” Monroe said, pausing as she pulled the memories to the forefront of her mind. “It was so surreal. It was like a war zone.”

Saturday marks the 20th anniversary of the 9/11 terrorist attacks on the twin towers of World Trade Center in New York City. Nearly 3,000 people were killed in the attacks carried out via planes hijacked by militants associated with the Islamic extremist group al Qaeda.

Despite the years gone by, for Monroe, 54, of Buchanan, and Veronique, 63, formerly of Buchanan and currently of Dallas, Texas, it still feels like yesterday. Both sisters were in NYC at the time of the 9/11 attacks — Monroe five blocks away at her restaurant job, and Veronique inside the World Trade Center when the plane hit the second tower.

Veronique, who lived in New Jersey at the time and worked for Morgan Stanley in NYC, recalled the morning of Sept. 11, 2001, as a quiet and calm.

“It was a beautiful day. It was about 70 degrees with a perfectly blue, crisp, clean sky,” she said. “The air was clean. I’ll never forget that. It was just the prettiest day.”

That would soon change. Just as Veronique was starting her day working on the 72nd floor of the second tower when she heard a loud bang. The first plane had hit the World Trade Center.

Initially, no one in her building thought to panic, as the crash was believed to have been a freak accident and that no further danger would be coming for the second tower. Still, Veronique said she felt a gut feeling to evacuate the building. She, while helping a colleague with mobility issues, began the long decent down the stairs to the building’s exit.

Veronique remembers seeing the sign for the 36th floor when she felt the ground rumbling under her. The second plane had it.

“It felt like an earthquake,” she said. “My instincts took over. I kicked off my shoes — I had those flip off shoes because it was summer — and threw them in my bag, and instinctively began running. I got down a few corridors and realized I had forgotten about the woman I was taking with me, so I went back for her.”

When she and other evacuees finally reached the exit, Veronique said the sight before her looked like something out of the movies as debris fell all around them.

“When we got out, the building looked the two cigarettes burning, that’s how I’ve always pictured it,” she said.

When the towers fell, Veronique was already a block and a half away from the wreckage. Even so, she said the sound, like a whirling tornado, was as loud as if she had been standing next to it.

“We got out just in time,” she said. “By then, I knew we were being attacked. One plane? That’s one thing. But two planes? It had to have been a terrorist attack.”

Just a few blocks over, Monroe spent 9/11 looking for her sister. When she had not heard from Veronique for several hours, Monroe assumed her sister had died in the attack.

“I couldn’t react, because I was running on adrenaline,” Monroe said. “I was just doing what I had to do.”

Later in the day, Monroe would check her voicemails on her home phone and discover a message from Veronique letting her sister know she was alive and well. Once Monroe’s worries about her sister’s safety were calmed, the impact of the day and what had happened hit her.

The next day, Monroe went and delivered food to first responders working through the wreckage.

“I’ll never forget it. Everything was white,” she said referring to ash that blanketed the city. “I could see my footprints. It was quiet, and New York is never quiet.”

The 9/11 attacks not only changed the world forever through a securities changes and a years-long war, but it also changed the sisters permanently.

Six months after the attacks, Monroe left New York for Buchanan to care for her mother. She quit her job, left her relationship of 15 years and changed paths, devoting herself to nonprofit efforts.

For Veronique, the experience taught her to be grateful for life.

“When I got out and looked at those buildings, I realized how lucky I was to get out, so I was full of gratitude. I still am,” she said. “It changed me. I was grateful for everything after that. … It taught me not to judge others, because everyone has a story, and to value your loved ones, because you never know what it going to happen.”

To help the community understand the impact 9/11 had, Monroe worked with fellow Buchanan residents and One Buchanan to place an installation in a downtown window. The display, which will be in place for at least a week, will feature Veronique’s experience as well as impressions from local high school students.

“We want the community to be somehow connected to 9/11, and this is our way of bringing it home,” Monroe said. “It will show that 20 years ago feels like just yesterday to some of us.”

As the 20th anniversary of the attacks arrives, both Veronique and Monroe said it is important for Americans to remembers 9/11 and understand the impact it has had.

“We need to get past the political end of 9/11 and go back to that day,” Monroe added. “If we can go back to that to tell people who were born post-9/11 what the country was all about right after … it just doesn’t make sense how divisive we have become as a country. Twenty years ago is not that long to go back to. We need to feel that time when we all came together.”