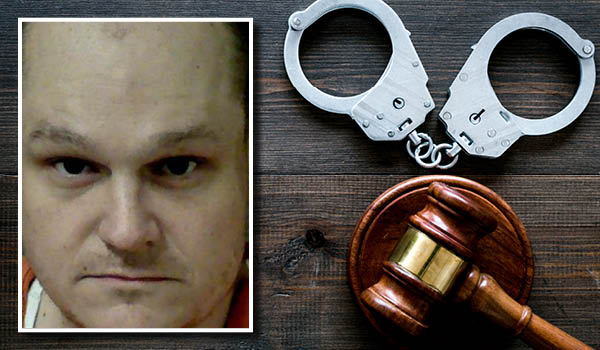 In Cass County Court Friday, a Lansing man is going to prison for his role in a two-state police chase.

Kelly Ryan Darnell, 36, of Lansing, pleaded guilty to fleeing police, unlawful driving away of an automobile and conspiracy to unlawful driving away of an automobile-all as a habitual offender and was sentenced to 58 months to 20 years in prison. He has no credit for time served as he is on parole from Ingham County. He must pay $1,684 in fines and costs.

The incident occurred Dec. 21, 2020, in Porter Township. Police were dispatched to the Union area on reports of a car fleeing Elkhart police. The car Darnell was riding in eventually was stopped when Cass and other police agencies joined the chase and deployed stop sticks.

During the 20-mile chase, Darnell and the driver threw items out of the window and threatened to shoot themselves if police didn’t back off.

Defense attorney Greg Feldman said Darnell had been to prison before and that it hadn’t helped him kick his drug addiction. “I’d like the court to know I am remorseful for what happened and take full responsibility, I was just as much as fault,” Darnell said.

Judge Herman noted that Darnell had spent the bulk of his adult life in jail or prison. “You’ve been using drugs since you were a teenager and marijuana since you were eight,” he said. “The only real option available is incarceration. You have said you wanted help but you’ve never moved in that direction in the past.”

• Robert Eugene Bowers, 58, of Elkhart, pleaded guilty to third offense drunk driving and was sentenced to two years’ probation, 30 days in jail with credit for four served with the rest on tether and $2,678 in fines, costs and restitution. The incident occurred May 15 in Union.

• Eugene Charles Vandergriff, 53, of South Bend, pleaded guilty to attempted carrying a concealed weapon and use of meth and was sentenced to two years’ probation, credit for 102 days served and $2,678. The incident occurred May 25, 2019, in Milton Township.

• Matthew Ryan Rose, 32, of South 13th Street in Niles, pleaded guilty to tampering with evidence as a habitual offender and was sentenced to two years’ probation, credit for 146 days served and $2,268 in fines and costs. The incident occurred July 23, 2020, in Niles.

• Edward Thomas Sobieski, 32, of Tharp Lake Road in Cassopolis, pleaded guilty to second offense drunk driving and driving while license suspended and was sentenced to 12 months’ probation, credit for 56 days served, 240 days community service and $2,135 in fines and costs. The incident occurred May 24 in Dowagiac.

• Clifton Dean Jewell, 39 of East Telegraph in Dowagiac, pleaded guilty to second offense domestic violence and was sentenced to 12 months’ probation and $2,335 in fines and costs. The incident occurred Jan. 2 in Dowagiac.