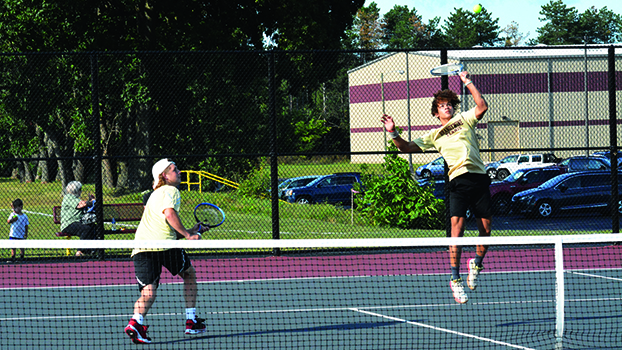 NILES — When Brandywine boys tennis No. 1 doubles duo of Carson Knapp and Sean Tweedy stepped onto the tennis court for their home match against Bronson, they had no idea their match would go the distance.

In a match that lasted more than two hours, the duo bested Colin and Lynsey Smith, of Bronson, to help their team earn a 6-2 win Thursday night.

“We played well in the first set and kind of got ahead of ourselves when we were up 5-2 in the second set,” Knapp said. “They came back and played us tough, but we closed it out by getting the third set.”

“In tennis, you never know what you’re going to get,” said Brandywine tennis coach Bruce Sidenbender. “There’s no clock; the only thing there is the sun.”

In just their third match of the season, Brandywine picked up wins in No. 2 doubles, No. 3 doubles and No. 4 doubles as well as No. 3 and No. 4 singles.

“We haven’t played a lot because of different things,” Sidenbender said. “There’s heat and rain. Our bus broke down [Wednesday] on our way to South Haven, so we’ve only played three matches. It was nice to get out, play and compete with others. We played well in spots, and we have a lot of new players. It’s good to get them out there and get some experience.”

By the time Knapp and Tweedy began their third set against Bronson, they were the only players remaining on the tennis court. According to Knapp, his key to staying focused during the match was to keep his mind on the current point.

“You just focus on point-by-point and try to get the next one,” Knapp said. “Don’t worry about what happened or what’s going to happen. Just try to win the point you’re in.”

“You have to keep competing. You’re gonna win a match like that if you keep at it,” Sidenbender said. “Our players always compete, and that is something I’m really happy about. They’re good athletes and they don’t like losing.”

Relieved to have come away with a win, Knapp said he and Tweedy have big goals for the season.

“We definitely want to win the conference,” he said. “We want to go far in the regional tournament, especially and then go to state with the whole team.”

According to Sidenbender, the Berrien-Cass-St. Joseph League tournament is just three weeks away.

“The season goes by pretty fast,” he said. “Most of the time, we play six or seven matches before we even start the school year. This year, that just didn’t work out for various reasons, but we’re looking forward to finishing the season strong.”