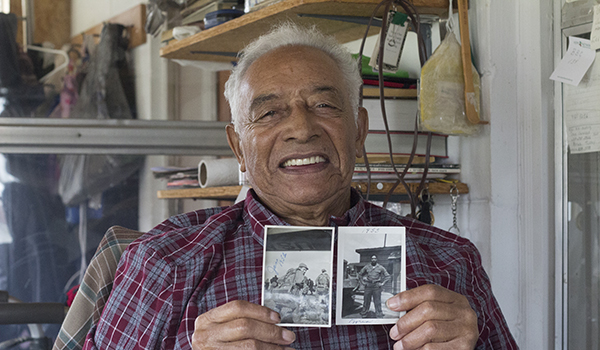 DOWAGIAC — A Dowagiac veteran will be recognized for his service in Washington D.C. next week.

Korean War veteran David Steele was one of 85 Michigan veterans selected to participate in the 2021 Talons Out Honor Flight on Sept. 18.

Founded in 2007, Honor Flight is a nonprofit organization that serves to transport America’s veterans to Washington, D.C. to visit memorials dedicated to honoring those who have served and sacrificed. All honored veterans travel at no cost to the
veteran.

Steele was informed of the flight in July by his children, who were aiming to surprise him with the honor in conjunction with his birthday. To his children’s surprise, his reaction to the news was not quite what they expected.

“They were surprised that he was not more enthusiastic,” said Steele’s wife, Joyce. “I figured he would be very excited because he likes adventures.”

Born in Dowagiac, Steele grew up in Cassopolis on his family’s farm and graduated from high school in 1949. While working at a factory with the Chicago Hardware Foundry, Steele was drafted into the U.S. Army in 1951 at the age of 21 and was deployed to Korea in 1952 after completing basic training.

Steele served one year in Korea and served in the engineer corps, where he was tasked with building bridges. While Steele was not on the front lines, his time in Korea was dangerous, nonetheless.

“When we got off the boat, we arrived at a compound and were there for a day and a half,” Steele said. “We received orders that everyone with last names A to L had to catch the nine o’clock train going north and M to Z the one o’clock train. The nine o’clock train never made it. I knew 26 guys on that train and never got to see them again. They wouldn’t tell us what happened to them.”

After returning home from the war and overcoming his protracted fight with polio, Steele worked as a steel hauler for 30 years before retiring in 1992. He and his wife Joyce, who were married shortly before his deployment, have six children, many of whom still live in the Dowagiac area.

The soon-to-be 91-year-old continues to enjoy life to the fullest, no matter what challenges he may face. Six years after having his right leg amputated due to a blood clot, the soldier marches on about his day with his prosthetic leg put in place.

For Steele, his marriage and his family are his greatest joys in life.

“The best thing that happened to me was taking care of six kids,” he said. “They could have gone to any college they wanted to. Five of them went to college and graduated, and I didn’t owe the colleges a dime.”

The feeling is mutual for Steele’s children, who are very proud of the father that raised them.

“My dad always told us that he has a name and to keep his name a good name and keep his name well-protected,” said Steele’s daughter, Renee Grady. “I’m the oldest of four girls and I set a wonderful example for them, but it’s because of my parents. My dad played softball with us whenever he was home. He was a truck driver so he didn’t get to participate in a lot of our stuff at school, but he was usually home every weekend. I just know he was a hard-working man. He’s proud of his children and I couldn’t have a better dad.”