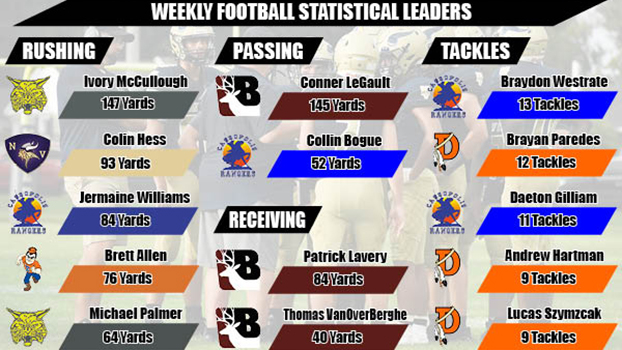 NILES — When Niles hosts Edwardsburg in a battle of Wolverine Conference unbeatens Friday night, it will be the first-ever meeting between the two schools.

Niles enters the game 2-0, having defeated Sturgis (24-6) in its Wolverine Conference debut and rival Buchanan (26-0).

Veteran Edwardsburg Coach Kevin Bartz said his team played much better in the second game against the Wildcats.

“I thought we improved offensively on our blocking assignments from week one to week two,” he said. “Further improvement needs to be made in our blocking technique by our linemen and our backs.”

“This Friday night offers up an exciting cross-town matchup between two undefeated teams that have never played each other in varsity football,” he said. “Both teams seem to have strong defenses that have given up relatively few points. Scot Shaw, who is a hall of fame coach, has many years of experience and has prepared for the ‘T’ offense before. He will have his players mentally and physically prepared to counteract our offensive attack. We will next to execute better than we have the past few weeks and control the line of scrimmage.”

Shaw hopes his team can continue to progress as it heads into the third week of the season.

“No real difference. We are looking to improve each week,” he said about the preparation for the Eddies. “No matter what the outcome, we still have a lot of games and football left.”

Niles has been strong on the defensive side of the ball since the opening game. The offense will need to continue to improve if the Vikings are going to keep moving forward.

“Offense is getting better each week. We can see that improvement consistently,” Shaw said.

Last week against Buchanan, Niles finished with 206 yards of total offense, of which 203 came on the ground.

Colin Hess rushed for 93 yards on 17 carries, while Kimoni McClean added 40 yards on three carries. Talon Brawley threw three passes for three yards, but it was good enough for a Vikings’ touchdown.

Edwardsburg has amassed 612 yards rushing through two games for an average of 6.6 yards per carry. Brett Allen leads the way with 144 yards on 10 carries and two touchdowns. Jacob Pegura is 3-of-5 passing for 127 yards and a pair of touchdowns.

Shaw is no stranger to the Edwardsburg offense. He knows the challenge it presents his defense in stopping the Eddies’ ground game.

“When someone figures that out, please sign me up for the newsletter,” he said.

The Eddies attempted point-after-touchdown kicks after every score last week. Trevor Houseworth made all but one kick, which was blocked.

“Our kicker, Trevor Houseworth, is greatly improved from last year,” Bartz said. “We have a lot of confidence in his kicking and also in the long snapping (Landon Mikel) and holding (Logan McColley and Patrick Szlanfucht). We still believe that two points are better than one, but until we have more confidence in the blocking of our running backs, we will continue to kick PATs.”

Kickoff is slated for 7 p.m.

The Bobcats will attempt to run their record to 3-0 for the second time in three years as they hosts Saugatuck at Selge Field for the first Friday night contest of the 2021 season.

Brandywine was 3-0 in 2019, which is the only other time it has faced Saugatuck in school history.

The Bobcats have opened the season with back-to-back wins against perennial playoff teams — Centreville and Cassopolis. Brandywine beat the Eagles 38-22 in the season opener before defeating the Rangers 30-24 last Thursday night.

Brandywine defeated Saugatuck 45-10 in their only meeting.

The Bobcats continue to run the ball well, using its size upfront to move the opponent’s defenses off the line of scrimmage.

The Trailblazers enter Friday night’s game with a 1-1 record. Saugatuck lost its season opener to White Pigeon 48-6, but rebounded to defeat Lakeview 45-7 last week. Saugatuck is seeking its first winning season since it went 9-2, losing in the district championship game in 2018.

The Bucks (0-1) are trying to recover from a 26-0 loss to rival Niles last Thursday night.

Buchanan only managed 173 yards of total offense against a vastly improved Viking defense from a season ago. Only 28 of those yards came on the ground.

Quarterback Connor LeGault did throw for 145 yards on 10-of-26 attempts. Patrick Lavery led the receivers with one catch for 53 yards.

The Bucks and Panthers are meeting on the gridiron for the first time since 2017, when Watervliet defeated Buchanan 72-36. The two teams were scheduled to play in 2020, but COVID-19 wiped out the first three games of the regular season.

Buchanan is 6-3 against Watervliet since 1990. The Panthers have won two straight games against the Bucks.

The Rangers are coming off a 30-24 loss to Brandywine last Thursday night.

Cassopolis is 1-1 on the year after edging perennial state powerhouse Schoolcraft 20-19 in the season opener.

The Rangers take on BCS Athletic Conference member Comstock, enters the game 2-0 after being Coloma (50-6) and Allegan (32-18). The Colts are trying to win their first three games of the season since 2007 when they went 9-3, losing to Zeeland West in the Division 4 regional championship game.

Cassopolis is led offensively by Jermaine Williams, who has rushed for 117 yards on 19 carries this season. Quarterback Collin Bogue has rushed for 96 yards on 13 totes, while he is 12-of-24 for 143 yards and a pair of touchdowns.

On defense, Brayden Westrate has 26 tackles, while Daeton Gilliam has 22 and R.J Drews 17. Reggie Hart has 17 defensive stops for the Rangers.

In its win over Allegan, Comstock quarterback Owen Drake threw for 94 yards and three touchdowns. He was 4-of-12 passing, with three of those receptions going to Israel Patterson, which were good for 88 yards. Drake also carried the ball seven times for 46 yards and a touchdown.

Nate Matthews was the top rusher with 87 yards and a score on 16 carries.

The game at William F. Scott Field is scheduled to kick off at 7 p.m.

The Chieftains (0-2) will be trying to snap a three-game losing streak dating back to last season when it heads Paw Paw Friday night.

Dowagiac will also be trying to defeat the Red Wolves for the first time since 2017, when it won 21-12. Since that time, Paw Paw has outscored Dowagiac 78-21.

The Chieftains are coming off a 42-8 Wolverine Conference loss to Plainwell. Dowagiac scored its first points of the season on a safety and a 50-yard touchdown drive in the final quarter.

The Chieftains have struggled offensively this season — not only scoring points — but in total yardage. Dowagiac had just 46 yards of total offense in its opening loss to Vicksburg and 98 yards last week against the Trojans.

Paw Paw (1-1) rebounded from its upset loss to Three Rivers on opening night to defeat Otsego 27-8. It was the 14th consecutive win for the Red Wolves against the Bulldogs.

Paw Paw was led by Cullen Sylvester, who had 128 yards on 19 carries. Zeyan Davis added 87 yards on nine carries.

Kickoff in the Red Wolves’ home opener is scheduled for 7 p.m.