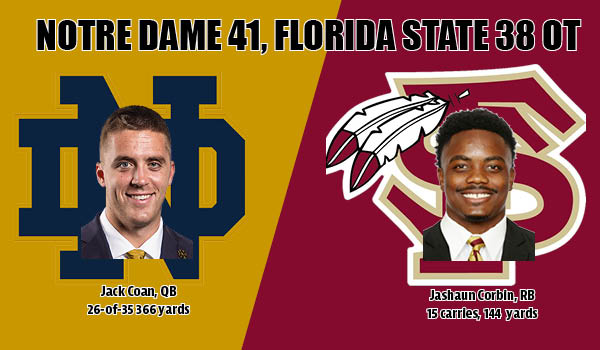 TALLAHASSEE, Fla. — It was not the opener that No. 9-ranked Notre Dame was hoping for against Florida State Sunday night.

The Fighting Irish led big early, but were forced into overtime where it needed a 41-yard field goal from Jonathan Doerer to give Notre Dame a 41-38 win over the Seminoles at Doak Campbell Stadium in front of 68,316 fans.

Jack Coan, the transfer from Wisconsin, hit Michael Mayer with a 41-yard touchdown pass with 2:09 to play in the opening quarter to stake the Fighting Irish to the 7-0 advantage.

Florida State, which had struggled the entire opening quarter offensively, finally found some traction when Jashaun Corbin raced 89 yards for the tying score with 20 seconds remaining in the opening quarter.

The Seminoles would take a 14-7 lead early in the second quarter with another touchdown run before Notre Dame scored the final 10 points of the opening half on a Doerer 48-yard field goal and a Coan touchdown pass to Joe Wilkins, which covered 23 yards.

The Fighting Irish appeared to have taken control of the contest in the third quarter with three touchdowns after Florida State opened the second half with a Jordan Travis 60-yard touchdown pass to Ja’Khi Douglas.

Coan, who threw for a Notre Dame record 366 yards in a season opener, connected with Kevin Austin for a 37-yard score and Kyren Wiliams from six yards out to extend the Fighting Irish lead to 38-20. The final score of the third quarter would be a Notre Dame 1-yard run by Chris Tyree.

The fourth quarter belonged to Florida State, which scored three times to tie the score at 38-38 to force the overtime.

Travis tossed a touchdown pass and Treshaun Ward added a touchdown run before a 43-yard field goal by Ryan Fitzgerald tied the game with 3:35 remaining in regulation.

Despite its early struggles offensively, Florida State would end up outgaining the Fighting Irish 442-431. The Seminoles ran for 264 yards compared to 65 by Notre Dame.

“Florida State played tremendous,” said Notre Dame Head Coach Brian Kelly. “Having Jordan Travis in there is very difficult to defend. But we found a way to win a difficult opener on the road.”

The Fighting Irish open the home portion of their season Saturday against Toledo from the Mid-American Conference. Local fans will be keeping a close eye on the game as former Dowagiac and Miami of Ohio standout Mark Staten is the Rockets’ tight ends/offensive tackles coach.

Kickoff is set for 2:30 p.m. The game will be broadcast on Peacock.