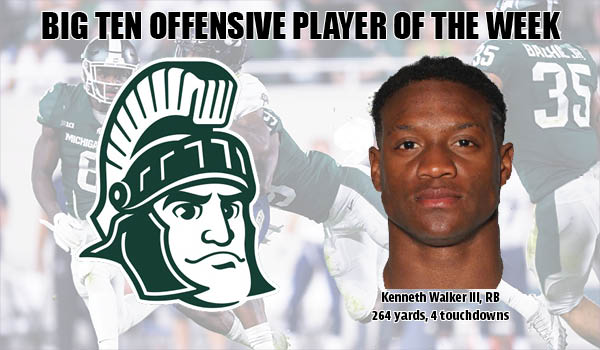 EAST LANSING — After a record-setting debut as a Spartan, junior running back Kenneth Walker III has been named the Big Ten Offensive Player of the Week.

A transfer from Wake Forest, Walker rushed for a career-high 264 yards — the seventh-highest total in school history — and scored a career-high four touchdowns to lead the Spartans past Northwestern, 38-21, on Sept. 3 at Ryan Field. It marked the most rushing yards by a Spartan in a debut.

On the Spartans’ first play from scrimmage, Walker raced 75 yards to the end zone, giving the Spartans a lead they wouldn’t relinquish all game. He added touchdown runs of three yards (midway through first quarter), five yards (third quarter) and six yards (fourth quarter), in addition to explosive runs of 50, 30 and 23 yards.

Walker’s 264 rushing yards are the most ever by a Spartan running back in an MSU season opener. He also posted the first 200-yard rushing game for a Spartan since Le’Veon Bell in 2012 (266 yards at Minnesota) and the four rushing TDs are the most since Edwin Baker had four vs. Minnesota in 2010.

Walker currently leads the nation in rushing and is tied for first in rushing touchdowns. He scored 17 rushing TDs in his first two seasons at Wake Forest and now has 21 overall in his career.

Michigan State (1-0) returns to action at noon Saturday, Sept. 11 for its home opener against Youngstown State (1-0). The game will be televised on the Big Ten Network.