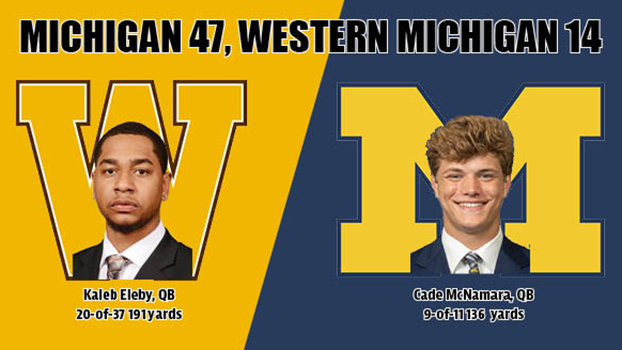 ANN ARBOR — The Western Michigan football team dropped its season opener at the University of Michigan, 47-14, in front of 109,295 fans at Michigan Stadium Saturday afternoon.

Red-shirt sophomore quarterback Kaleb Eleby finished with 191 yards through the air on 20-of-37 passing and one touchdown. Sophomore Sean Tyler led the Broncos (0-1) with 55 yards on the ground on 10 carries. La’Darius Jefferson rushed for 38 yards on 10 carries for one touchdown.

Senior transfer Bryce Nunnelly had a game-high seven catches for 52 yards. Sophomore Corey Crooms led the Broncos with 58 yards and a touchdown on four receptions. Senior safety A.J. Thomas had a team-best 10 tackles, while linebacker Ryan Selig finished with a career-high eight.

Western Michigan was out-gained by the Wolverine 550-317. The Broncos completed the game without a single turnover and the offensive line only allowed one sack.

Michigan scored on the game’s opening drive, going 75 yards on 11 plays and finishing it off with a 14-yard touchdown pass to Blake Corum from Cade McNamara.

After the ensuing kickoff, the Broncos started at their own 25. An unsportsmanlike conduct penalty on the Wolverines helped extend WMU’s drive early, getting the team to its 40. On third and four from the WMU 46 Eleby connected with Jaylen Hall for 29 yards to move down to the Michigan 25-yard line. Pass in the flat to Tyler got the Broncos down to the 5-yard line before a rush by Eleby got the ball to the two. From there, Jefferson pounded it into the end zone for the team’s first touchdown of the year.

After a Bronco punt to open the third quarter, A.J. Henning took a reverse 74 yards for a touchdown to push the lead to 33-7 after a missed 2-point conversion. The Wolverines scored again to open the fourth quarter on a 30-yard run by Corum and added another touchdown on a 69-yard pass to Daylen Baldwin.

The Broncos put together a late touchdown drive, going 75 yards in 10 plays. Eleby found Crooms at the Michigan 5-yard line and he spun and gained space to free himself and get to the end zone. The 27-yard reception was the second touchdown of his career.

Western Michigan hosts Illinois State at 5 p.m. Saturday for its home-opener. The game can also be watched live on ESPN+ and heard live on the Bronco Radio Network.

The Southwestern Michigan College cross country team had a…