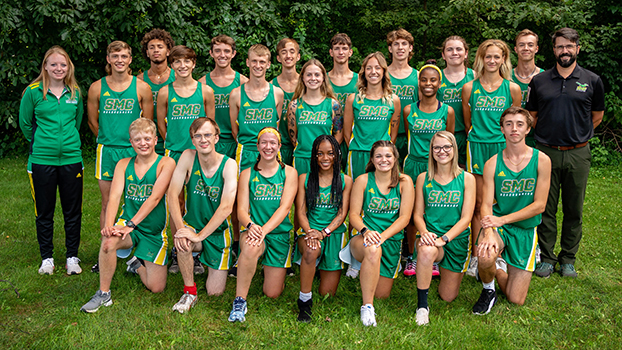 For the first time in more than 25 years, Southwestern Michigan College will compete in athletics as the cross country team opens its 2021 season. (Photo courtesy Rebecca Steenbeke, Blue Print Photography)

DOWAGIAC — For the first time in more than 25 years, Southwestern Michigan College will compete in junior college athletics starting today.

The Roadrunnners will begin their cross country season Friday at the Golden Grizzlies Open in Rochester. First-year coach Zac Sartori is looking forward to seeing the team he put together in just a few months will fare.

“Recruiting this summer was a lot of fun, chaotic, but fun,” he said. “Thankfully, my predecessor had done some good work so I had a solid footing. When I arrived here on June 1, we had 11 athletes who had verbally committed to running at SMC or had already signed. I set a goal for myself to fill out the women’s team and continue to expand on the men’s side. I reached out to some colleagues, checked the recruiting websites, and scoured the campus for talented young runners.”

The hard work paid off.

“It was tough, but with the help of our admissions team, campus life, and many others, we managed to find another 10 student-athletes,” Sartori said. “What’s more is that we’re still growing. It’s been an exciting roller coaster and now we’re setting our sights on the future. My hope is to be 30 strong in the 2022 cross country season.”

Only the second coach in school history, Sartori thinks he knows how things will go in the season opener.

“I’ve got a pretty good idea who will be in the top five this week,” he said. “On the men’s side, Alec and E.T. Saylor have been running strong all summer and come in as our top two. Alex Blanton, Kelsey Brown and Levi Hall will likely round out the remaining top five. Alex has had a great summer and comes to us strong and healthy. Kelsey is a very talented young runner who came to us from Buchanan. His training is going well, although he’s had a few bumps and bruises along the way. Levi has been struggling all summer with injury, but we’re managing things with cross-training and I’m confident he’ll race well on Friday.

“If course it’s impossible to predict who is going to show up on race day. Look out for William Westphal, Buster Ward, Ben Gillesby, and a surprise talent in Adam Frye. Any of those for could break into our top 5 and I expect they’ll be battling it out for the top seven.”

As far as the women’s team goes, it will be a work in progress.

“On the women’s side, we’re building,” Sartori said. “Many of our women are in their first ever cross country season. Many of the others are coming back to the sport after a year or two of recreational running on their own. Look for Ava Hart out front. She’s running cross country for the first time. Her talent has come as a very pleasant surprise from the time that I saw her ordering coffee at the Zollar Cafe during her orientation. Bailee Shambaugh of Mishawaka will likely finish as our second runner and Vanessa Crisenbery of Coloma will likely be out third. After that, I expect Coralynn Hellenthal, Tionge Kamanga, and Abby Lee to battle it out for the fourth, fifth, and sixth positions. We’ll only be running six this week as two of our women are recovering from some minor injury.”

No matter the outcome on Friday, the Roadrunners will have won because they have returned to the National Junior College Athletic Association scene, which they dominated for years before all sports were shut down 25 years ago.

Sartori said he knows that the opener will be challenging for his squad, but rewarding at the same time.

“I expect our runners to work hard in their first meet,” he said. They’ve had three difficult weeks of training and we’re not slowing down for an early-season meet. I’m not terribly concerned about how we place. I’ve got my eyes set on regionals and nationals. We’re going to train hard and find out success in the post-season when it matters most. I’ve told all my runners more than once, we’re training for regionals and nationals. My hope is that we’ll be able to give the top take in the region a run for their money in late October.”