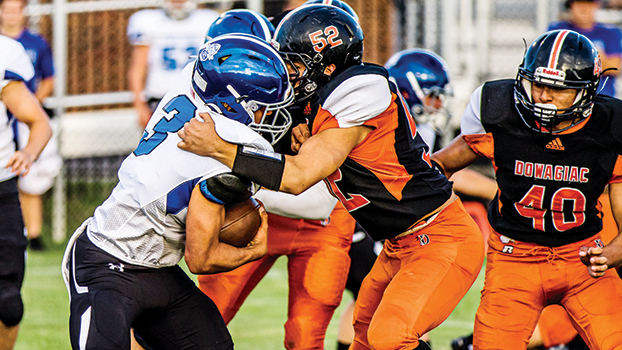 DOWAGIAC — The rebuilding of the Dowagiac football program is going to take some time, according to first-year coach Duane Davis.

The Chieftains took some baby steps at Chris Taylor-Alumni Field Thursday night against Wolverine Conference foe Plainwell. Unfortunately, those steps were not enough to keep from the Trojans, leaving Dowagiac with a 42-8 victory.

Despite the loss, there were some positives for the Chieftains, like the first points of the year being scored on a safety when Dowagiac’s defense forced a Plainwell punt deep in its own end. The snap sailed over the punter’s head and out of bounds for a safety.

Then there was the first touchdown of the season, which was scored by Justin Bannow on a six-yard run late in the contest.

“It was a nice, sustained drive,” Davis said about the 50-yard touchdown march. “We tried to shoot ourselves in the foot down at the end, but they got better.”

Davis was pleased with the defensive effort. The 42 points on the scoreboard were not indicative of how it played. The offense put the defense in difficult situations multiple times during the contest, which led to easy points for the Trojans.

“We came out and we stuffed them right off the bat,” Davis said. “That was just pure effort. Later on, when the big plays happened, I think it kind of took the wind out of our sails. I’ve got young kids. We have freshmen and sophomores out there trying to compete. For them to go out there against juniors and seniors, that shows real growth.”

Plainwell (2-0) scored twice in the first quarter and three times in the second quarter to open up a 35-0 halftime cushion.

Dowagiac held the Trojans to a single touchdown in the second half, most of which was played with a running clock.

What did the Chieftains improve on from its opening week loss to Vicksburg?

Davis was disappointed in his team’s lack of composure at times, including Jordan Hardin being ejected in the second half for a pair of unsportsmanlike conduct penalties.

“Week one, we are down big, but nobody fell apart,” he said. “The locker room was fine. But then you get this, and we start to revert to bad ways. That is on me, and we are going to fix that. That will not happen in this program.”

The Chieftains return to action Friday night as they travel to Paw Paw for another Wolverine Conference contest. Kickoff is scheduled for 7 p.m.