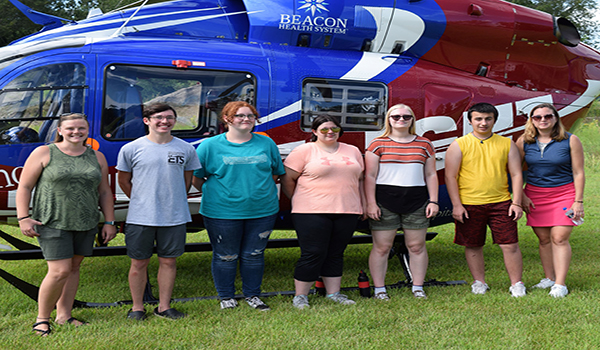 DOWAGIAC — A group of local college students recently learned what it takes to become a first responder.

At 120 miles per hour, a two-hour flight saves a four-hour drive.

“We can go to Cleveland, Cincinnati, Indianapolis, Chicago,” said Tracey Daggy, a Memorial Health Systems flight nurse since 2006. “Ann Arbor is about a 45-minute flight, Kalamazoo 30 minutes” based at South Bend International Airport. “I’ve gone as far as Pittsburgh, but that isn’t a typical flight.”

Pilot Kyle McClure flew Black Hawks for the Army and “just got out of the Coast Guard a couple of months ago.”

McClure said a 2012 Airbus helicopter “shell” was outfitted by his company, Metro Aviation, with specific medical equipment typically found in an emergency room or intensive care unit. There is no “dedicated spare,” but Metro has several throughout the country it can bring for back-up during maintenance.

Paramedic Kit Castetter divides his time between flying and the Goshen Fire Department.

“I really like the (first responder) community and understanding what they have to go through,” Gosa said. “Last time I did this I found out my great-grandpa on my dad’s side was a firefighter, which sparked more interest. The possibility of becoming a volunteer firefighter is still in the back of my head. I either want to be a machinist or a welder as my career goal.”

“I’ve been going to the fire station since I was little,” she said.

Her dad is with the Central Cass Fire Department, protecting Cassopolis and LaGrange and Jefferson townships.

“Being a canine handler would be cool,” she said. “Having that symbiotic connection of trusting them with your life and them trusting you with theirs. Dogs can sense more, but you understand more. Working dogs as partners are more interesting than a pet. I’m more interested in law enforcement than the fire side because I’m not a fan of smoke.”

“It’s something new. Firefighters are like heroes, so I thought it would be interesting to see inside what they do,” Arguelles-Rodriguez said. “The hose is really heavy and hard to control. It’s much more complicated than it looks when you watch others. I’m thinking about becoming a police officer.”

Solarek, who, like Ryan, built robots at STEM Camp last month, is interested in earning a bachelor’s degree in chemistry and a master’s degree in chemical engineering to work for NASA, but also in becoming a volunteer firefighter.

“I just went to an overnight camp at Bear Lake. One director was a volunteer firefighter,” Solarek said, solving two Rubik’s Cubes while talking. “This camp teaches the training that goes into public safety because a lot of people want to be part of it, but don’t know how. It’s physically demanding and you have to be mentally prepared. I want to be part of trying to fix the world.”

“My biggest goal is making sure the kids stay safe while getting a good experience,” said Dowagiac Fire Department Deputy Chief Robert Smith, assisted by his personnel and by three Wayne Township representatives.

With a limited number of career spots, most firefighters juggle a day job with family responsibilities and 255 hours of training.

“I started in Three Rivers 40 years ago,” Smith said. “I lived a block from the fire station and used to go down there when I was little and tell the chief I was going to sign up when I got out of high school (in 1972). I did, but he didn’t have any openings. Ten years later I went back because I was still interested. He still had my application and hired me on the spot as an on-call guy. A career spot opened in ’85. I came (to Dowagiac) in ’90 because the ambulance was looking for help.”