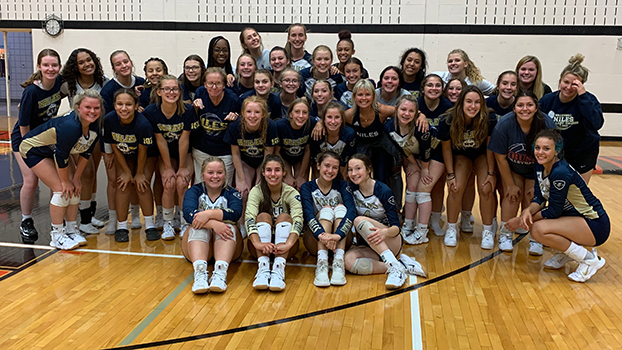 ALLEGAN — In its inaugural season in the Wolverine Conference, the Niles volleyball program is most certainly beginning to turn some heads.

The Vikings improved to 2-0 in conference matches Wednesday night as they traveled to Allegan and beat the host Tigers 3-0. In fact, Niles completed a sweep of Allegan as its freshman and JV volleyball teams were victorious as well.

“The Niles varsity volleyball team brought the energy tonight and swept Allegan,” said Niles Coach Jenny Nate. “All three of our teams came disciplined, focused and ready to support each other on the road.”

“I loved our energy during our JV and freshman matches,” Nate said. “The varsity players were completely focused on cheering our other two teams on to their victories before we took the court for our match. Allegan had a pretty big student section, and it was awesome to see our JV and freshman team return the favor and create a student section behind our bench. I attribute our higher scores tonight to our consistency, aggressive play, focus, and discipline, but I also know the momentum that the teams brought to each other. That’s what it’s all about.”

The stakes will be raised next week for the Vikings as they get ready to take on defending Wolverine Conference champion Edwardsburg, which defeated visiting Three Rivers 3-0 Wednesday night.

“We are looking forward to heading back to practice tomorrow to prepare for our next match against Edwardsburg on our home court next Thursday,” Nate said.

Emma Bruckner had a standout night for the Vikings as she led the team in points (17), aces (3), kills (15) and assists (17). Marika Ruppart was also big at the net for Niles with eight kills and a pair of blocks. Zyon Brozo and Amara Palmer finished with seven and five kills, respectively.