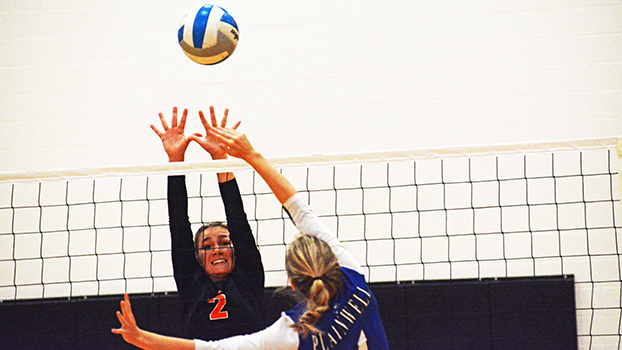 Wimberley was forced to sit out a few plays in the fourth set after suffering a bloody nose and a welt above her eye after diving to make a play on the volleyball. A few plays were all she was willing to see as she returned to the line-up and went on to score the match-winning kill in the fifth set.

The win was Dowagiac’s first win over the Trojans since joining the Wolverine Conference in 2006.

“A few weeks ago, she split open her chin, which was bleeding during a volleyball game,” said Dowagiac coach Tony Hooley. “That kid is tough.”

“I don’t ever want to leave my team hanging,” she said. “I’m tough so I can brave through it. It hurt a little but I can deal with a little pain. If you’re a good player you gotta be tough both mentally and physically.”

The match was a back and forth affair, with either team able to find a groove long enough to take control.

After a set four struggle that saw Dowagiac fall 25-11, Wimberley and her teammates were priming themselves to a strong finish against the Trojans. She did just that, scored the set-deciding points for good measure.

“We just had to make sure that we came out on top and that we had energy and we worked down from the last game,” she said. “We said to come out on top and show that we could be them because we can never be timid. Just do what you’ve been doing the whole thing and you’ll be fine. Just go for it.”

“We’ve been a little bit up and down at times [this year] but I think we’re going in the right direction,” Hooley said. “Last year, we just folded a lot mentally. This year, I think we’re kind of overcoming a lot of that, mentally. I’m proud of them.”

When the Chieftains need a point, Hooley turns to his Wimberley, Davis and Stack to make it happen.

“They’ve been on varsity for a combined total of 11 years,” Hooley said. “They are our veteran players. They’re our strength; That’s where we get most of our offense from and they play all the way around the court. If they’re off, we’re in trouble. That being said, we don’t win this game without everyone playing their part.”

“With a win in tow, Hooley and Wimberley hope to continue their winning ways.

“I think the league is a little ripe for some good competition this year,” Hooley said. “I don’t think there’s a lot of weakness, but there’s a lot lot teams I think we can be competitive with. So if we just keep winning games, we’ll be good.”

“It’s such a building block,” Wimberley said. “Last year, we had a very tough season. We were a decent team but we just didn’t play up to the desired level. This year, we came out and we’re beating teams that we haven’t beat in 14 years. We’re gonna have a good season. I’m excited for it.”