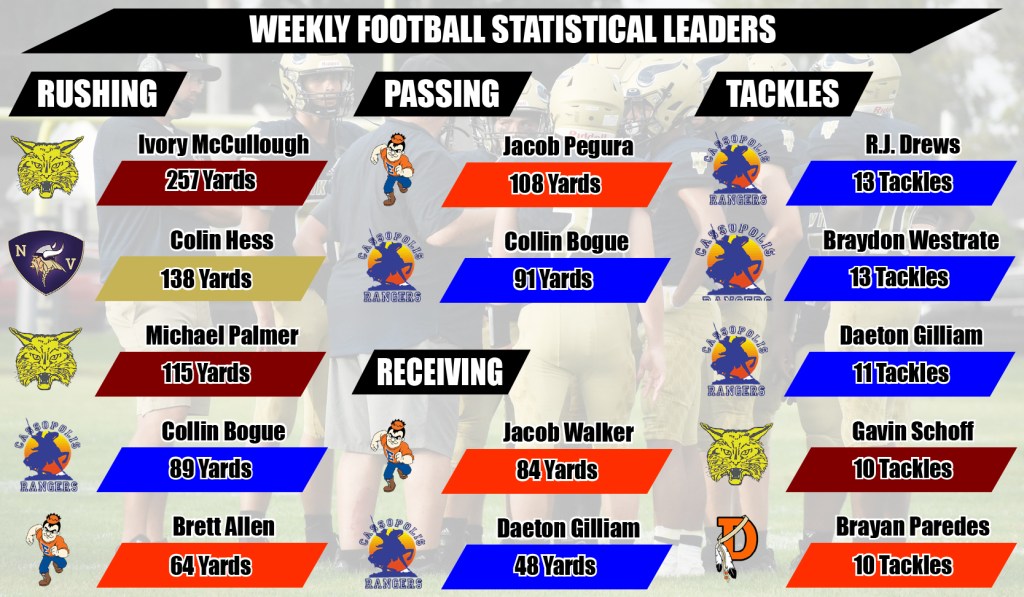 NILES — A pair of teams coming off big season-opening victories will square off Wednesday night in a non-conference contest at William F. Scott Field in Cassopolis.

The game was moved up a day from its originally scheduled date due to a lack of officials.

Visiting Brandywine (1-0) defeated Division 8 defending state champion Centreville, out of the Southwest 10 Conference, 30-22, while Cassopolis, which also plays in the Southwest 10, edged Schoolcraft 20-10.

“Both teams had big wins in game one,” said Brandywine Coach Mike Nate. “It should be a great game.”

The Bobcats rushed for nearly 400 yards in its opener, led by Ivory McCullough’s 257 yards. Brandywine also got 115 yards from Michael Palmer.

That could be a problem for the Bobcats against the Rangers if they do not shore up the defense.

Cassopolis (1-0) had a 78-yard run by quarterback Collin Bogue and a 90-yard kickoff return from Daishean Jamison.

“What worries me about Cassopolis is their speed, and they have a very good quarterback who can run and throw — the best passer to come out of Cassopolis that I have seen,” Nate said. “Cass also has great special teams, a good kicker and they hustle down the field.”

Second-year Cassopolis Coach Steve Green said his team performed like he thought it would.

“We are about where the staff expected them to be with a lot of new starters this season,” he said. “After watching film, we learned that we can improve at every position.”

Green said his team needs to improve its tackling and get 11 guys to the football on defense. He was pleased with how his team kept its composure.

“They had plenty of chances to hang their heads when things weren’t going our way, and they didn’t. I was very pleased with their grit and fight to the end.”

What concerns him most about Brandywine is the team’s physical stature.

“They have size up front on both sides of the ball,” he said. “We have all new starters upfront, so they are learning under fire, so to speak.”

Niles will be riding the emotion of winning its first game of the season, while host Buchanan will be hitting the gridiron for the first time in 2021.

The Vikings (1-0) is coming off a 24-6 Wolverine Conference victory over Sturgis last Thursday night. Buchanan had its season-opener with Hartford canceled due to a lack of players for the Indians.

Both coaches feel that the week off for the Bucks could benefit them.

“Not playing week one is tough, but it allowed us to focus on the little things throughout the week, so our hope would be to see less of the first-game mistakes you typically get,” said Buchanan Coach Mark Frey. “It was great to watch [Niles] live to see their game speed, as well as what philosophy Coach [Scot] Shaw is bringing to the Vikings program.”

Shaw said that the Bucks’ advantage is no tape on Buchanan from week one.

What the first-year Niles coach learned about his team after watching film is there were plenty of pluses and minuses.

“Probably the obvious [is] that the film doesn’t lie,” he said. “We did a lot of things well, but also too many things wrong. The best part is the ability to fix mistakes when we win. That means we played well enough to win.”

What does his team still need to work on?

“Consistency in blocking,” Shaw said. “For the most part, we were correct on who to block. We just need to get better. I think it was a pleasant to see our effort. We played hard.”

Frey knows that his defense will have its work cut out for it Thursday night.

“Given they run the veer, the emphasis will be on doing our jobs and not trying to be heroes,” he said. “That offense is about numbers, so we will do our best to match theirs and play physical.”

Kickoff at Memorial Field in Buchanan is set for 7 p.m.