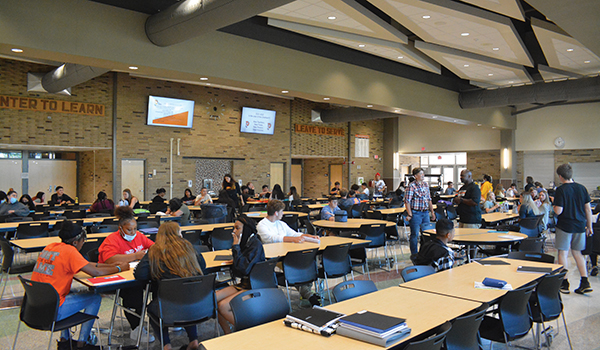 DOWAGIAC — Monday brought with it the first day of classes for students, teachers and staff in the Dowagiac Union Schools district.

The first day can be a busy one for principals and administrators, but for Union High School principal Stephanie Mitchell, the day was flowing relatively smoothly.

“It wasn’t too bad,” she said. “We had a lot of people come to the [high school] open house last week. I would say almost half of our kids came, with most of the freshmen. We had planned for schedules to be distributed when the kids got off the school bus so that helped a lot of problems. We had some last-minute schedule tweaks and things like that. But for the most part, it has been pretty quiet.”

According to Mitchell, more than 87 percent of the school’s students attended high school on the first day. She said attendance and student participation is a focus this year.

“We want to raise student engagement by raising their achievement and attendance,” Mitchell said. “So first, we’ll get them here and engage them much more deeply with the content in the curriculum, and then hopefully, we’ll see the scores rise and everybody will succeed on our much higher level.”

While a first-year principal at DUHS, Mitchell is not new to the area, having spent many of her summers growing up in Sister Lakes. But she said having a student orientation to better acquaint herself with the community helped build relationships with both students and parents ahead of the first day of classes.

“I think it was very helpful that they came and introduced themselves to me,” she said. “Some of them felt comfortable enough to share some of their ideas or concerns and ask questions. If I don’t know the answer which as a new person I don’t always know, the reality is that I’m forced to find and seek answers for things that I wasn’t even aware of, so it has been helpful. Those kinds of things happen every day.”

Mitchell aims to be supportive of not only students and parents but the school’s staff as well.

“I’m very responsive to my teachers,” she said. “When they have a need, I like to have them work smarter, not harder. When they come to me with things, I want to be as accommodating as I can. It’s kind of a learning curve that never ends.”