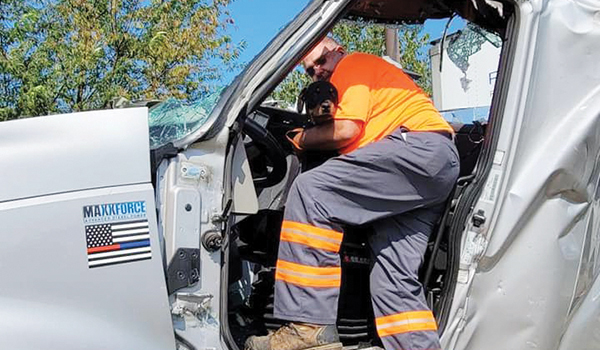 DOWAGIAC — A local first responder’s discovery was the talk of the town on Sunday.

Rob True of True’s Towing, 725 N. Front St., Dowagiac, went viral on Facebook after his post about rescuing a dog from the wreck of a semi-truck Sunday morning was published on the social media service.

True and his team responded to a Saturday morning accident on I-94, in which the semi-truck in question was totaled.

The accident claimed the life of a Grand Rapids construction worker on-site and left the semi-truck driver with serious injuries.

“It was bad,” True said. “The poor guy never knew what hit him. There was nothing left. Somebody made a senseless mistake. Now the family has a closed casket, and to me, there’s no closure.”

The mangled semi was hauled back to True’s Towing, seemingly putting an end to yet another sad story — that is until True received a phone call Sunday morning from the wife of the semi-truck driver injured in the crash.

According to her, the family’s dog was riding with the driver in the semi.

“No one had said anything about there being a dog, and we didn’t see or hear a dog during the crash cleanup,” True said. “I thought to myself that there was no way that a dog was still alive in that wrecked truck.”

After receiving the phone call, True and his wife went out to the wrecked truck to investigate. After hearing something, he sifted through the vehicle until he found a Rottweiler trapped under the truck’s sleeper. The dog was returned to its family later that day.

True was surprised to find the dog still alive in the wreckage, especially considering the hot, humid temperatures the area experienced that Saturday and that the truck was covered with a tarp all day.

“He was packed in there with his leg caught and was not able to move,” True said. “He was happy to see me. He was dehydrated, and I had to pick glass off him but other than that, he was fine.”

True shared his story on Facebook on Sunday and included photos of the rescued dog. As of Tuesday morning, True’s post received more than 950 reactions and more than 200 shares.

While being a first-responder can often mean being presented with tragedy, True was glad to be able to help a reeling family and provide the community with a silver lining to an otherwise somber tale.

“We deal with this on a daily basis,” True said. “As first responders, we show up and do our job, but that wears on you after a while. The only reason I posted that was so everyone could see that something good came out of that. Just a little sigh of relief.

“[The Facebook post] went crazy, and I had no intentions of that. It was unbelievable; The phone calls and stuff. I was just doing my job.”