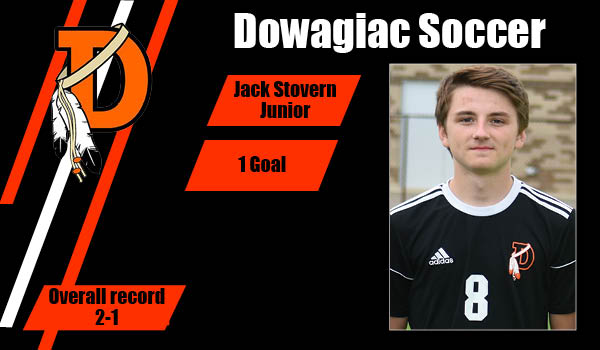 Edwardsburg blanked South Haven 4-0, but had to settle for a 1-1 tie with Kalamazoo Central.

The remaining matches were canceled due to excessive heat.

In the win over North Muskegon, Dowagiac (2-1) got its lone goal from Jack Stovern. Noah Green assisted on the score.

In the loss to the Bears, Jacob Scouler had a pair of goals for St Joseph.

“We played a much better game of soccer today,” said Dowagiac Coach Mike Williams. “We are starting to get organized on the field and work as a whole unit.”

The Chieftains are back in action Tuesday when they host Brandywine in a non-conference match that is scheduled to begin at 5 p.m.

Kya Bryant, Brock Leniski, Grayson Herbert and Alex Carfi scored goals for the Eddies in their win over South Haven.

Owen Kertest scored the Edwardsburg goal against Kalamazoo Central off the assist from Daniel Carfi.

The Eddies, who are now 2-2-1 on the year, return to the pitch Tuesday when they travel to Marshall for a non-conference match. Play is set to begin at 6:30 p.m.