Rangers hold on to edge Schoolcraft 20-19 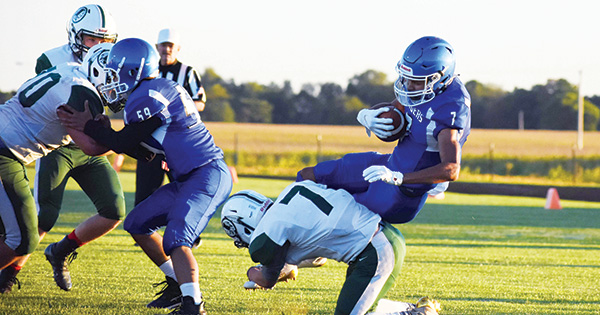 SCHOOLCRAFT — Thursday night’s season opener between visiting Cassopolis and Schoolcraft turned into a thriller in the final quarter.

The Rangers led 8-7 heading into the fourth quarter, but needed a rally to hold on for a 20-19 victory over the Eagles.

Schoolcraft (0-1) grabbed a 13-8 lead with a short run, but Cassopolis responded quickly as on the ensuing kickoff, Daishean Jamison returned the kick 90 yards for the go-ahead score.

Cassopolis (1-0) would not be denied on this night. The Rangers drove down the field and scored on a five-yard run by Jermaine Williams with 2:49 remaining in the contest.

After the Eagles grabbed a 7-0 lead in the first quarter, Cassopolis responded with a 78-yard run by Collin Bogue, who added the 2-point conversion run to give the Rangers an 8-7 lead.

Cassopolis will host Brandywine, a 38-32 winner over Southwest 10 Conference member and defending Division 8 state champion Centreville, Wednesday at 7:30 p.m. The game was moved up a day due to a lack of officials.