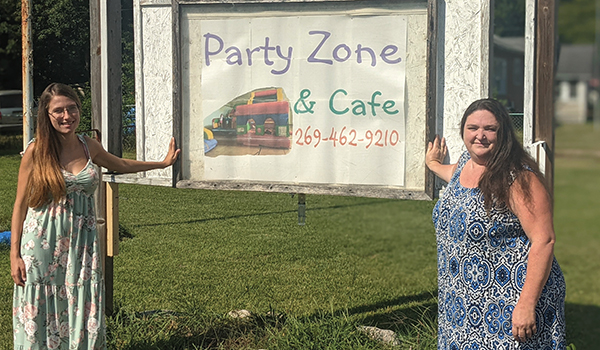 DOWAGIAC — A Niles mother-daughter duo will be cooking up a classic pasta dish to raise money for their new business in Dowagiac.

The menu will consist of spaghetti with meat sauce, macaroni salad, garlic bread, chocolate cake and beverages. Tickets for the event cost $7 in advance and $9 at the door for adults, $4 for children ages 6-12 and an all-you-can-eat option for $15.

Party Zone and Cafe is a party and entertainment center owned and operated by Stockton and Kieffer. The facility features a large, rentable banquet hall for all party needs as well as entertainment for children of all ages, including ball pits, drift karts, blow-up obstacle courses and bounce houses. A daycare center, Tiny Tators Childcare, is in development on the other side of the building.

Proceeds from the spaghetti dinner will go towards funding and renovating the daycare center.

“There is a lot of equipment that we need for the daycare,” Stockton said. “It’s been tough. We’re trying to get more stuff for the kids. We don’t have the funds for advertisements. All we can do is hand out fliers.”

The cost for entry to the Party Zone is $15 for one child and $10 for an additional child. Adults are asked to stay for children who are 12 and under.

Stockton and Kieffer noticed the lack of child-friendly party space in the area and decided to create a space themselves.

“I have seven grandkids now,” Stockton said. “Every time we wanted to have a party, we couldn’t find a place to have a party. There’s nothing around here. So I got together with my daughter and we thought we could do this.”

Party Zone is located at the site of the former McKinley Elementary School, ​​which was originally built in 1904 and expanded in 1953. At the time of its closure in 2008, it was the district’s second oldest building after The Wolverine Building, which was built in 1885 before being torn down in 2013.

The renovation process has been a labor of love for Stockton and Kieffer, who purchased the dilapidated property in 2019.

“The former owner sold it to us as-is,” Stockton said. “It had a leaky ceiling, no working toilets or sinks. It’s been a big challenge; We’ve been working on it for more than two years now. We’ve pumped our own money into this building and have had to have supplies built for us. Lots of nights of no sleep about this.”

While the party hall of the facility is open for use, Stockton and Kieffer would like to eventually open an on-site cafe and tavern on weekends and nights, pending zoning approval from the city.

Stockton and Kieffer are hoping the fundraiser will be their first step toward their dream becoming a reality.

“My dream is to fill this place with a bunch of kids,” Stockton said. “I want this to be a place the entire family can enjoy.”