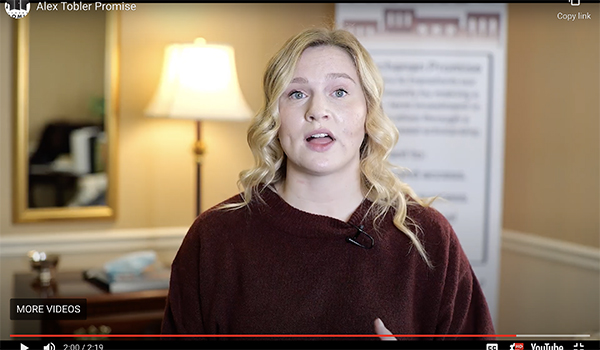 BUCHANAN — A community promise years in the making has finally been fulfilled.

The Board of Trustees for Michigan Gateway Community Foundation recently presented the next chapter of the Buchanan Promise scholarship — a video series titled Promise Fulfilled.

As 2021 marked the first year scholarship recipients of the Buchanan Promise graduated from four-year colleges and universities, Gateway President and CEO Michael Rowland said it was a fitting time to celebrate scholarship recipients with a video series that highlights their accomplishments and educational journeys.

“It’s a remarkable achievement and something we are really proud of as an organization,” Rowland said. “Seeing these students achieve their dreams is one of the really fun things about this job — that we really get to make an impact on the Buchanan community directly.”

Buchanan Promise, a post-secondary education scholarship program, started in 2016. It is offered to any Buchanan Community Schools student who resides in the district — from Buchanan to Galien — and has qualified for an approved post-secondary program. The Promise will provide up to $2,500 a year for a maximum of $10,000 to a student’s educational institution, depending on how long they have lived in the district. There are no GPA or SAT score requirements for the scholarship. The promise was established with an endowment fund created by Walter Schirmer.

“I’m a Buchanan graduate, and I wish the Promise was around when I was there,” Rowland said. “My only hope going forward is that we can continue this great legacy.”

The first Promise recipient featured in the series is Buchanan native Alex Tobler. She graduated from Buchanan High School in 2017 with the full $10,000 from the Buchanan Promise. She was among the first-ever class to receive the Promise.

“It was an amazing gift, super generous,” Tobler said in the Promise Fulfilled video. “You don’t really see something like that very often. It means the world. … It gives other kids a chance to go to school who maybe wouldn’t have gone before.”

“If I wouldn’t have had the Promise, I would have had to take out loans in the amount I got for the Promise, so I am very grateful,” she said. “The Buchanan Promise allowed me to pursue my education and really just go wherever I wanted. The scholarship has really allowed people to try different things and do different things. It’s a gift.”

Tobler’s story will be far from the last featured in the Promise Fulfilled series. Rowland said Gateway planned to release videos over the course of coming years, and planned to release another before the end of the year. While Tobler went to a private college, Rowland said the foundation planned to highlight a number of different experiences, including trade schools, community colleges and public universities.

“We want to show that the promise is there for all,” Rowland said. “We want people to see the impact these dollars are having on young people and hopefully encourage people to learn more about it.”