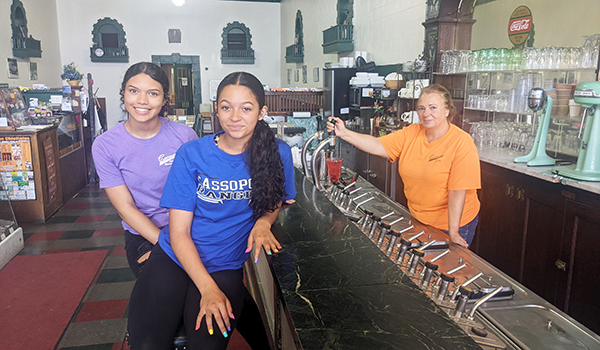 DOWAGIAC — A local sweets shop has incurred the wrath of Mother Nature this week.

The average high temperature in Dowagiac from Friday, Aug. 20 to Thursday, Aug. 26 was 89 degrees and the average humidity was 73 percent, according to Weather.com. For Johnson, who cooks her own caramel, chocolate, toffees and creams, making sweets amid this heatwave has been a challenge.

“A lot of people don’t realize that heat and humidity affect a lot of things,” she said. “Most of what I make is cooked anywhere between 200- and 300-degrees Fahrenheit, and it sometimes takes two hours for one of those batches to cook.”

Johnson said she cannot cook with the heat and humidity as it is now because it would heat the store up to unbearable temperatures, which would impact the quality of her sweets.

“Nothing would ever set properly, so we definitely have to wait for that to cut down a little bit before I can start cooking those things,” she said. “Chocolate is a lot more difficult to work with too because it has to sit up in a certain amount of time at a certain temperature, so we’re kind of struggling with a little bit of that too.”

Heatwaves and muggy air are nothing new in Michigan. According to Johnson, what sets this heatwave apart from previous ones is its persistence.

“It’s just this aggravating when it’s this long,” she said. “Usually, we don’t have this high of heat and humidity for as long as what we have been having recently. It does make it a little more challenging.”

Johnson said that she has tried cooking sweets both early in the morning and late in the evening but the humidity still persists.

“It’s still taking so long to cool down right now that coming in early or late isn’t even helping right now,” she said.

The heatwave is the latest challenge Johnson has had to tackle. Because of the current economic and employment situation, bulk and novelty candy supplies have reached an “all-time low,” according to Johnson.

“A lot of my distributors are having problems getting it because of the current employment situation,” Johnson said. “Manufacturing is down right now, and a lot of stuff people don’t realize the extent of what goes into making and stocking our candy.”

While the heatwave has done a number on candy production, it has been a boon for other aspects of Johnson’s business.

“We have seen a big increase in demand for ice cream,” Johnson said. “A lot of people are coming in earlier in the day. I’m sure people are just wanting to get home as soon as they can because of this heat and be done.”

As the season begins to transition from summer to fall, Johnson said her popular caramel apples will soon be available.

“We’ll have them as soon as apples are ready and the humidity drops,” she said. “Everybody’s looking forward to caramel apple time and the [Under the Harvest Moon Festival].”