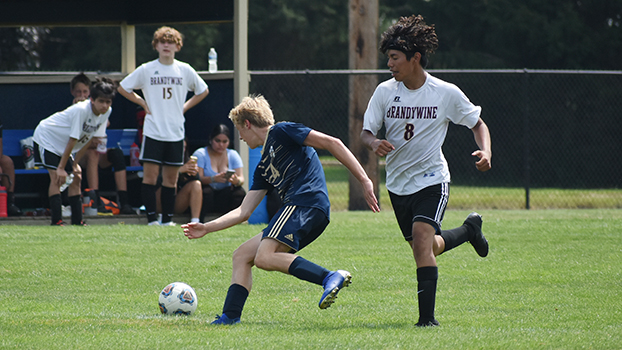 Casey Marlin (left) had a goal and an assist as Niles defeated Brandywine 3-2 in non-conference soccer Wednesday. (Leader photo/SCOTT NOVAK)

Last Saturday, the Vikings edged the Bobcats 3-2 to win its 11th consecutive VanDenBerg Invitational championship. Wednesday night, Niles built a 3-0 halftime lead, withstood a second-half comeback by the Bobcats to earn a 6-3 victory.

The win kept the Vikings undefeated (3-0) on the season. Brandywine drops to 1-2 on the year.

“We worked on some things and tightened up some things from the tournament,” said Niles Coach Abel Fonseca. “We focused on some finishing and kids trying to attack the goal with some confidence. We came out and got a couple of quick goals. We moved the ball well, which set us up 3-0 at halftime.”

Brandywine came out at halftime and cut the Niles lead to 3-2 with a pair of goals from Jacob Sherrick.

“It was overall a good game, but we couldn’t keep up with them with the heat and a shallow bench,” Brandywine Coach Caleb Adams said. “They were up 3-0 at halftime. We scored two in the first two minutes of the second half, but we had to pull our defense to strengthen our offense, and that left us open.”

The Vikings were able to regroup, and following three goals from Matthew Roberts, Bridges and Andrew Cutajar, they were able to fend off the Bobcats. Marlin and Thornton picked up assists on the Roberts and Bridges goals, respectively.

Brandywine’s other second-half goal came off the foot of Patricio Segundo. Pedro Segundo had a pair of assists for the Bobcats.

“We had a couple of people sitting out to get a break after playing the entire first half,” Fonseca said about the change in momentum to start the second half. “The center-backs had some miscommunication, and we had a breakdown. We worked through it and held our own after that.

Niles is back on the pitch Monday as it hosts Kalamazoo Loy Norrix in a non-conference match slated to begin at 5 p.m. Brandywine will travel to Dowagiac on Tuesday for a non-league match set to begin at 5 p.m.