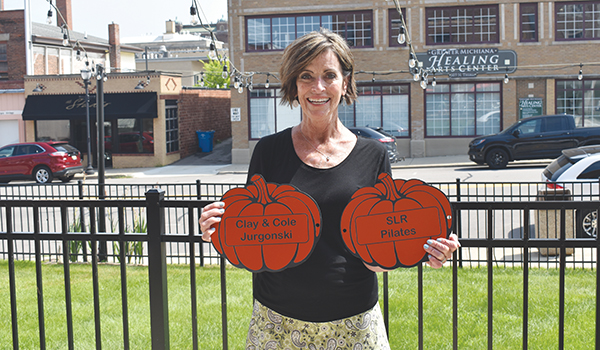 River Essence Group, a Niles-based organization aimed at beautifying the city, is currently raising funds to decorate downtown for the fall season. To help fund the project, the organization is selling pumpkins engraved with businesses’ or individuals’ names to be placed downtown. Those interested in participating in the fundraiser can donate one pumpkin for $55 or wrap a light pole with two for $75. Pumpkins are on sale through Aug. 31. Pumpkins can also be purchased to be displayed at personal homes. The cost of home decoration pumpkins is $45.

“What we are doing is we are going to put cornstalks on every light pole, and then we are going to have ribbons made by The Flower Cart, and then these signs are going to be on either side,” said Vikki Jurgonski, president of River Essence Group, as she held up one of the pumpkins. “When people walk up and down the sidewalks, they will be able to see the pumpkins and who sponsored them.”

River Essence announced the fundraiser on social media this week, and Jurgonski said many downtown businesses had already donated a pumpkin to the fall project.

“I’m beyond grateful,” Jurgonski said. “People are loving it. The community really wants to be involved, and we are just trying to create some community togetherness.”

Funds raised from the pumpkin fundraiser will support upcoming River Essence projects including planting flowers in the spring.

River Essence Group was formed earlier this summer and has already been busy with beautification projects. Jurgonski said she believes decorating the downtown is an important aspect of creating a vibrant community in Niles.

“It just makes everyone so happy — it just makes you feel so good and happy to walk downtown,” she said. “I want the town to be beautiful. I think it’s important because I really think it just makes people feel good.”

The pumpkin fundraiser will culminate with the downtown decorating on Sept. 18. Decorating will begin at 9 a.m., and Jurgonski said she would encourage anyone to wants to help to volunteer their time to the decoration efforts.

“We are going to serve cider and donuts,” she said. “We are trying to make it a really cool fall event for everyone. With how hot it is this week, we are hoping it will be a nice, crisp fall morning. We would love for the community to show up.”

To purchase a pumpkin for the fundraiser, email riveressencegroup@yahoo.com for information