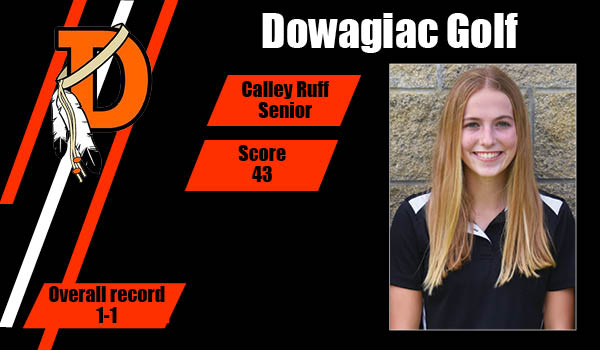 The Trojans proved why they are favored to win the league championship as they shot 179, while the Chieftains finished with a season-best 196.

“I knew we needed to be under 200, but 179 is a pretty good score, I don’t care who you are,” said Dowagiac Coach Bob Turner. “We played well, improved by 13 shots from last night [Tuesday]. We left a few shots out there, but everyone played well overall.”

For the second straight match, Calley Ruff shot 43 to lead the Chieftains. Dowagiac also got a 46 from Rebecca Guernsey, a 50 from Anna Ironside, a 57 from Cora Wegner and a 58 from Carlee Spagnoli.

The Chieftains return to the links Tuesday when they travel to Paw Paw for a Wolverine Conference match, scheduled to begin at 4 p.m.

EDWARDSBURG — For the second straight match, Edwardsburg shot 209 as a team.

This time, the score resulted in an easy victory over visiting Three Rivers, which shot 295, at Four Lakes Country Club Wednesday.

Chloe Baker earned medalist honors as she shot 47 to lead the Eddies.

Edwardsburg also got a trio of 56s from Channing Green, Chelsea Zeismer and Sam Stewart. MacKenzie Schaible finished with a 59.

The Eddies are back in action Monday as they head to Niles to face the Vikings in a Wolverine Conference match at Orchard Hills Country Club, along with Three Rivers. Play is scheduled to begin at 4 p.m.