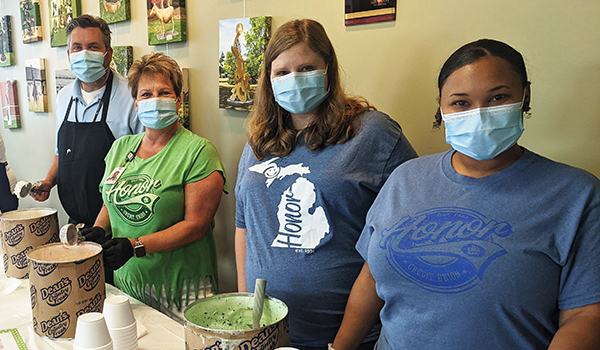 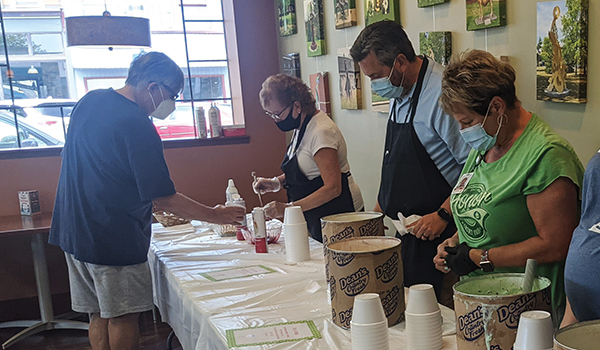 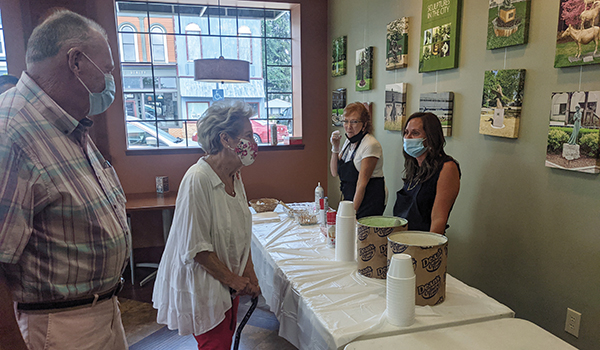 DOWAGIAC — The Cass County Council on Aging provided community members with an opportunity to beat the heat and meet and greet with tasty treats Wednesday afternoon.

Community members lined up prior to the event’s 1 p.m. start time in an effort to get first dibs on their favorite flavor of ice cream. COA director of community development Kelli Casey was pleased with the turnout of Wednesday’s event.

“It was great,” she said. “I think everybody came in and socialized with each other, had a good snack and beat the heat a little bit. It was the perfect day to have it and I think it turned out pretty nice.”

The annual event is a collaboration between the COA and Honor Credit Union’s Dowagiac branch, which sponsored the event. HCU Community Assistant Vice President Janie Reifenberg and HCU Dowagiac staff Abigail Ludwig and Jackie Green were on hand to serve ice cream to community members.

“People were lined up ahead of time, so we started scooping [ice cream] early,” Reifenberg said. “It was awesome to see some familiar faces. It was great to get out, and it was a perfect day for ice cream.”

Last year’s ice cream social was hosted on the grounds of the James E. Snow Professional Building due to the pandemic.

“The city worked with us last year and brought in picnic tables and everything, which was great,” Casey said. “But there’s nothing like having it back at home.”

The ice cream social was open to community members of all ages. Reifenberg was glad to see people take advantage of the event.

“We had some children here,” she said. “It was great to see them with smiles on their faces. Everyone loves ice cream.”

The event was especially welcome for Ludwig and Green, who have been working remotely for more than a year due to the COVID pandemic. Engaging the community at the ice cream social was something they enjoyed doing.

“It was nice getting out in the community,” Ludwig said. “I saw a lot of Honor [Credit Union] members here. It was definitely nice seeing a lot of familiar faces and working in the community.”

“This event was a break from my home office,” Green said. “It was nice seeing everyone, and of course ice cream is a plus.”

Participants could choose from flavors including berry swirl, pecan praline, chocolate and vanilla, with toppings like strawberry syrup, sprinkles, nuts and whipped cream also available. According to Casey and Reifenberg, the most popular flavors of ice cream were praline pecan and Mackinac Island Fudge.

“Pecan is always number one,” Casey said. “That’s the first go-to and then Mackinac fudge, but we try to finish up. We try to have everybody’s favorite standbys and then add something new. Mint chip was new this year.”

“The bowls were heaping with ice cream,” Reifenberg said. “No one took just one scoop, it was two or three scoops. Everyone left satisfied.”