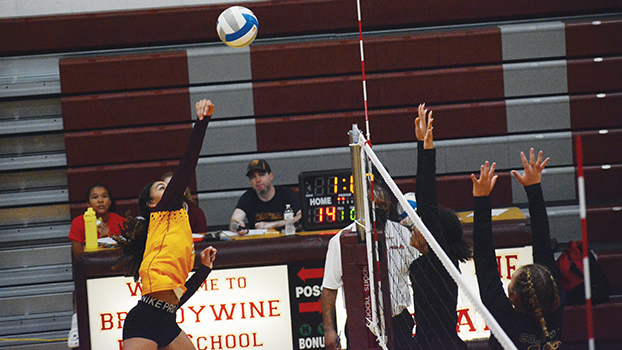 “I’m excited to win at home,” she said. “The girls have played better in every match. We’re young. We have five sophomores on our varsity team, so we have a lot of things to work on. But we’re getting better every day, which is the goal.”

A former head coach at South Bend Adams and assistant at Mishawaka, Zablocki-Kohler inherited the Brandywine program from Ray Prestly, who guided the Bobcats to two district titles.

While she may be new to Bobcat country, her goals and expectations for the team are consistent with Brandywine’s tradition.

“We worked really hard this summer to get faster and stronger,” she said. “We put in a lot of time doing that and that’s evident on the court. “We’ve seen it improve from the beginning and we just have to keep building on the program’s success.”

The Bobcats got off to a fast start in the first game, jumping out to a 15-4 lead before taking the game 25-8. Game two saw Brandywine get bogged down with mental errors and miscues. With the game tied 15-15, the Bobcats responded with a 10-2 run to win the game.

In game three, Brandywine limited the errors and carried the momentum from game two into game three to seal the victory.

“[Responding in game two] was huge,” Zablocki-Kohler said. “On Monday night, we had the same kind of thing but there was no response. So it’s nice we were able to make improvements and were able to make a comeback. They want to win and they will work hard to get there. We just have to put the small pieces together and I think we’ll be even better.”

“Brumitt is our go-to hitter without a doubt,” Zablocki-Kohler said. “She played well. Elizabeth Stockdale’s always a surprise but in a good way. You never know what she’s gonna pull out or what ball she’s gonna dig. Everybody played pretty well. We have a team where everyone contributes, so that’s nice. Anyone can step in at any moment.”