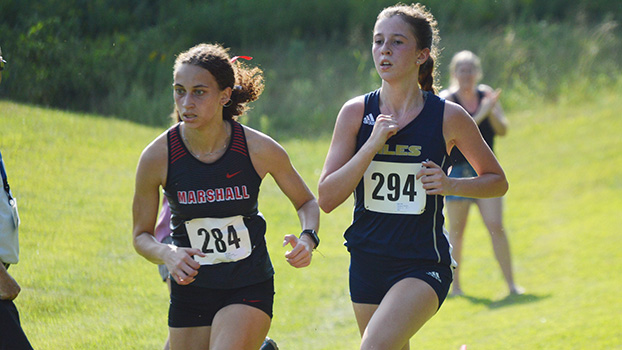 Marshall was the overall winner with 22 points, while the Vikings were second with 55 and Lawton third with 86 points.

Kendra Koster, of Lawton, was the individual champion with a time of 20:50.

Veteran Niles Coach Jami Roden said that the goal of the team is to always finish high at an invitational.

“Our goal in any invite is to win or place in the top two or three depending on the teams,” she said. “However, we adjusted our goal due to the extremely hot weather conditions. We, as coaches, told the girls that we did not care about their time but wanted them to be mentally tough and finish the race. They did not do their traditional warm-ups because we wanted them to conserve their energy.”

Roden said she was pleased with her runners’ effort in the tough conditions.

“I was so happy and proud that every single Niles girl finished the race despite almost every school having a girl drop out because of the extreme weather conditions,” she said. “It was a bonus to get second place tonight.”

The Niles boys team only had three runners and was not able to post a team score.

Host Three Rivers won the team title with 54 points. Bronson was second with 87 and Olivet third with 114.

Boden Genoves, of Coloma, was the overall winner with a time of 18:13.