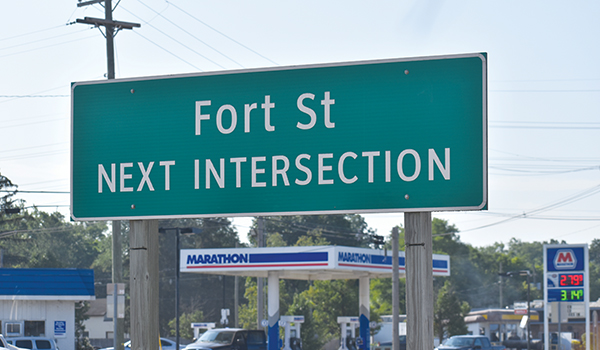 NILES — For years, the intersection of Fort Street and M-51 has been home to bustling businesses, the Niles city/township line — and a host of car accidents. After years of complaints, area residents are now petitioning for a traffic signal to be installed at the intersection for safety. However, traffic experts warned the solution will not be so simple.

Friday morning, area woman Abigayle Johnson posted on social media that she had been in an accident at the M-51 and Fort intersection. The post received more than 150 reactions. Following the accident, Niles Mayor Nick Shelton posted in a community Facebook group encouraging residents to reach out to the Michigan Department of Transportation, which controls that section of M-51, regarding safety concerns at the intersection. Friday alone, MDOT received more than 100 emails regarding the crossing at M-51/Fort.

Additionally, a change.org petition was filed to place a traffic signal at the Fort/M-51 intersection. As of Tuesday morning, more than 900 residents had signed the petition.

“I’ve lived in Niles 90 percent of my life, and that is something everyone has always talked about,” said Niles resident Bettina Wolfe Payton, who started the petition. “I live in the area, and it is pretty difficult to travel down there. I normally go down to Silverbrook just to avoid that intersection.”

While MDOT officials said they understand resident’s concerns, fixing traffic and safety issues at the intersection is more complicated than it may seem at first glance.

“We are aware that there is a concerted public effort and very large public request for a signal at that intersection, as there has been for a while now,” said Nick Schirripa, MDOT southwest region media representative. “Traffic signals are not safety devices; they are traffic control devices. If installed where not warranted, instead of reducing the numbers of crashes, traffic signals can increase the numbers of different kinds of crashes, essentially trading one safety problem for another. You’re creating more problems than you solve.”

According to MDOT data, 53 crashes have been reported within a 250-foot radius of the M-51/Fort intersection over the last five years. Of those crashes, only 17 have occurred at the intersection proper, while 27 crashes resulted from people turning out of businesses such as Speedway or Taco Bell without an appropriate gap in traffic.

“We understand what people are asking of us, but we want to be sure that if we put a signal in, it is doing what they want it to do, which is creating opportunities for people to turn out of driveways,” Schirripa said. “That is what the problem is here — people need gaps in traffic to turn onto M-51. … It’s not as simple as putting up a signal, then all your problems are solved. That’s not how it works.”

Currently, a MDOT project to work on the M-51 corridor from Oak Street to the US-12 interchange is slated for 2023. While Schirripa said that project is currently in the early planning stages, he said MDOT would be looking at all possible options to help with traffic flow and make driving safer on M-51.

“That project is in design, and one piece of that project may be a signal at Fort Street,” he said. “We have a number of solutions in our toolbox. It’s just a matter of figuring out what is the best solution for this location. We want to be sure that we are solving the problem we are being asked to solve and not creating other problems.”

Until plans for the 2023 project are finalized and implemented, Schirripa encouraged Niles residents to drive safer near M-51 and Fort Street, advice that was echoed by Niles Police Captain Kevin Kosten. Of the accidents his office has investigated near the intersection, Kosten said most were caused by drivers turning left out of businesses without waiting for a proper gap in traffic.

“The most dangerous thing there is the left-hand turn,” Kosten said. “We would caution that if you are going to turn left, make sure you are patient enough so that gaps in traffic accommodate you pulling out successfully. We also urge that drivers with the right of way on S. 11th watch their speed, as the cause [of accidents] seems to be a combination of the left turn and the speed of vehicles.”

In addition to his call for safe driving, Schirripa said he wants area residents to know that MDOT takes their concerns seriously.

“We have heard and understand completely the desire of the folks of the city of Niles and Niles Township for a signal at this intersection,” he said. “We want to deliver a solution that improves the safety of the M-51 corridor in Niles, and we will do our due diligence to make sure that whatever solution we deliver not only meets the needs and desires of the motorists in and around Niles, but does so in a safe and efficient manner.”

Whether the traffic problem near Fort Street is solved with a signal or another solution, Wolfe-Payton said she knows something needs to be done to make the area safer for drivers.

“We just want people to be safe,” she said. “I’m not sure where the petition will go, but I know a lot of people have been frustrated with that intersection for a long time.”