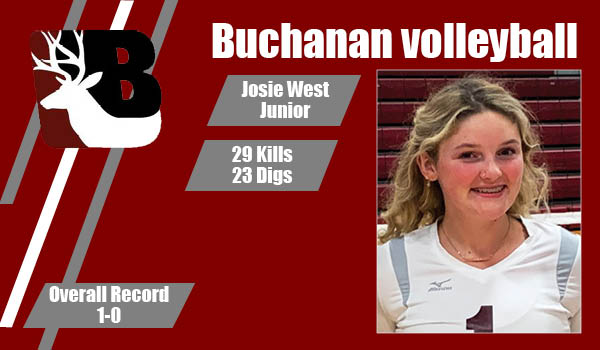 BUCHANAN — Things finally clicked for the Buchanan volleyball team in the fourth set of their non-conference match against visiting Cassopolis Monday night.

The Bucks were down 2-1 heading to the fourth set when the right combination of players got the team headed in the right direction. Buchanan dominated the fourth set to square the match at 2-2 and went on to win the fifth and deciding set 15-2 to earn a 3-2 win over the Rangers.

“We have been trying to find a lineup that works all summer, and I felt like in the fourth set we found a lineup that clicked,” said Buchanan Coach Shelly Bossert. “We had an issue adjusting to Faith [Carson] not being on the court because we are so used to her toughness at the net.”

Carson did not play in the contest due to what Bossert called a misunderstanding in her game gear. But that did not mean she could not help her teammates overcoming the upset-minded Rangers.

“She stepped up and cheered on the bench, which really gave us some momentum,” Bossert said. “We fought hard tonight, and I’m proud of my team because it was a real team effort.”

It was all Buchanan from there. Led by junior Josie West, who seemingly came up big every time the Bucks needed her to, won the fourth set 25-14.

West finished the night with 29 kills and 23 digs. Buchanan also got 33 digs from Hailey Jonazke, eight kills and five blocks from Alyssa Carson, while Lauren Strefling finished with four kills and 14 digs.