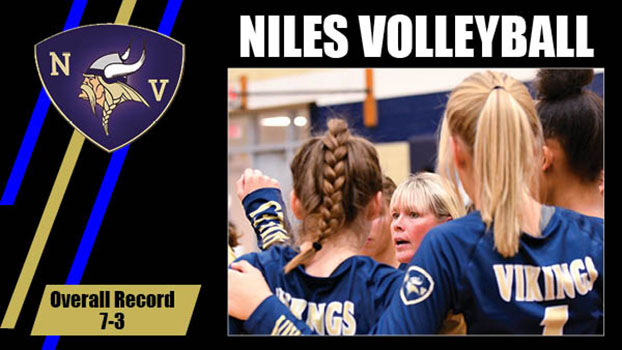 PORTAGE — The Niles volleyball team completed a two-day stretch of tournaments with a 7-3 overall record.

On Friday, the Vikings finished second at the Gull Lake Invitational. Just 13 hours later, Niles went 2-2 at the Portage Central Invitational, which featured some top-tier teams.

“We have a very tough week one of our season every year,” said Niles Coach Jenny Nate. “I think it’s critical for my players to get a glimpse at and face some of the top teams in the state early on in order to see exactly what we need to do to win at the highest level. I want them to be challenged to play faster and tougher right out of the gate so that we can see where we stand and to set team and individual goals to focus on in week two.”

“We went 2-2 today, and I think we came away knowing some really specific areas of strengths and weaknesses,” Nate said. “We will turn around and head to Vicksburg on Monday, to Hamilton on Tuesday, and will host a conference match on Wednesday against Sturgis. I know my players, and while I told them they are to get some rest tonight and tomorrow, I’m sure many are already at home studying film from the past two days. I’m excited to see their improvement in the coming week.”