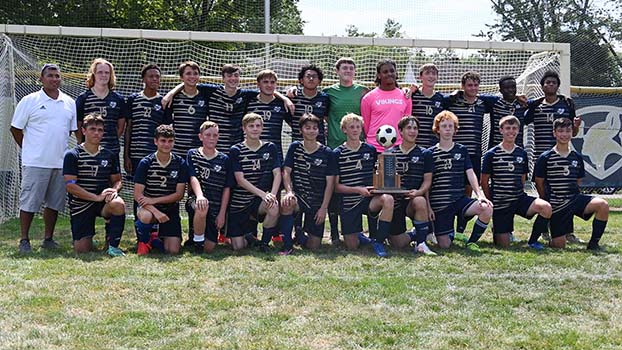 The Vikings reached the championship match of the tournament, which was not held in 2020 due to COVID-19 restrictions, with a come-from-behind 2-1 win over Cassopolis. Brandywine defeated Buchanan, which is the last team to have won the title in 2009, 4-1.

All four teams had to battle temperatures in the high 80s with heat indexes well into the 90s. While the semifinals were played in much cooler morning temperatures, the championship and consolation matches tested the conditioning of all four teams.

In the end, Niles was able to take advantage of shorter benches for both the Rangers and the Bobcats to continue its stranglehold on the VanDenBerg trophy.

“It is a learning process for us,” said Niles Coach Abel Fonseca. “We are still learning when to use our plays and swinging the ball around. Things like that. We stay a little too compacted at times. We just have to learn the play the ball wide.”

Fonseca said that being able to work in the preseason aided his team in getting ready for the season opener.

“We didn’t have any delays and were able to work over the summertime,” he said. “We got our conditioning a little bit better and we did a lot of stuff in the offseason to get us ready.”

Unlike the semifinals, Niles got on the board first in the opening 30 minutes of play as Andrew Ntisful scored off an assist by Gage Neumman.

Brandywine rallied to tie the score at 1-1 before halftime on a goal by Andrew Shadler.

In the second half, the Vikings outscored the Bobcats 2-1 to hold on for the victory.

Brandywine’s goal, scored in the closing minutes of the match, came off the foot of Pat Segundo.

Bobcats’ Coach Caleb Adams was pleased overall with how his team played in both matches.

“We are very happy with our play,” he said. “Usually we are not in it, but this year we are in it. We have been working on our passing and possessing the ball. Our offense is strong, but our defense has struggled a little bit. We have some holes to fill. We had a whole bunch of injured players. We had six, but only two were active.”

In the semifinals, Cassopolis grabbed an early 1-0 lead as Logan Pflug scored the goal for the Rangers. That lead stood up until late in the second half when Caleb Thorton and Nathan Becraft scored goals for the Vikings. Marlin and Braden Zimmerman picked up the assists.

In Brandywine’s win over the Bucks, the match was deadlocked at 1-1 at halftime thanks to goals by the Bobcats’ Tyler Deming and the Bucks’ Jake Robles.

In the second half, Pedro Segundo scored off an assist by Pat Segundo, while Shadler and Isaac Martinez also found the back of the net. Shadler’s goal came off a penalty kick. Martinez’s goal was unassisted.

Brandywine is back at Niles on Wednesday for a rematch. Both teams are looking forward to the second meeting in five days.

“We will be well-rested and have less cramps than today,” Adams said. “We will have another starter back on defense from vacation.”

The match is scheduled to begin at 5 p.m.