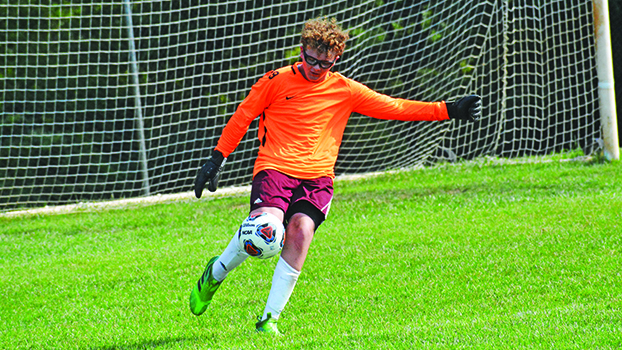 Buchanan won the consolation match of the VandDenBerg Invitational in a shootout Saturday. (Leader photo/MAXWELL HARDEN)

NILES — When his team needed him most, Mason Frontczak delivered.

The Buchanan freshman goalkeeper made the game-winning save to give the Bucks a sudden-death shootout victory over Cassopolis in VanDenBerg Invitational at Brandywine High School Saturday afternoon.

“I didn’t know who was going to kick,” Frontczak said. “When I’m in goal, I try to be confident or else I’m gonna miss the ball, or lose it.”

The Vikings won their 11th consecutive VanDenBerg championship with a 3-2 win over Brandywine.

Frontczak — who has been playing soccer for eight years and goalkeeping for four — was swarmed by teammates after helping his team earn its first win of the season.

“It was awesome,” Frontczak said. It felt really great.”

“He’s amazing,” he said. “I knew about him when he was in middle school coming up under the ranks. This is his first year on the varsity squad and he’s just a stud. I’m so happy to have him for the next four years. He was definitely MVP of this game today. I don’t know how many saves he had but I think I lost count.”

Buchanan struck first with a Britain Philip goal to give the Bucks a 1-0 lead with 26:27 to go in the first half. The Rangers countered with goals from Logan Pflug and Kenny May to take a 2-1 halftime lead.

An R.J. Drews goal pushed Cassopolis’ lead to 3-1 with 25:23 to play in the game before Logan Grwinski scored the final two goals in regulation to send the game to a shootout, which the Bucks won 7-6 after Frontczak stopped Malachi Ward’s attempt to tie the shootout.

“I’m pleased with the way they came back in the second half of the second game,” Philip said. “We’re down three players, so we only had one sub. We’re playing short-handed and just the dramatic finish is always fun, even if it’s a second or third place in a tournament. It’s always a good experience for these guys.”

“You don’t normally see that many goals made back to back like that,” said Cassopolis Coach Austin Francis. “I thought someone would miss and put one over. It’s unusual that we had to go use extra kickers.”

The loss was tough for Francis and his players, who weren’t able to capitalize on opportunities near the net.

“We had the opportunities,” Francis said. “We took 25 shots in the second game and scored three. We just have to learn how to finish.”

The two-game sample size gave Francis time to assess his team’s strengths and weaknesses he aims to address as the season unfolds.

“I think we found out that we’re definitely more of a first-half team than a second-half team,” he said. ”We’ve struggled closing out games. I don’t know if it’s a mental thing or what, but we typically played really well in the first half and then don’t do as well in the second half. So that’s what we’ll be working on for sure.”

Philip and his Bucks (1-1) hope to take the positive momentum into Tuesday’s 5:30 p.m. game at Dowagiac.

“I’m excited for the season,” he said. “I think we’re gonna be surprising a few people.”