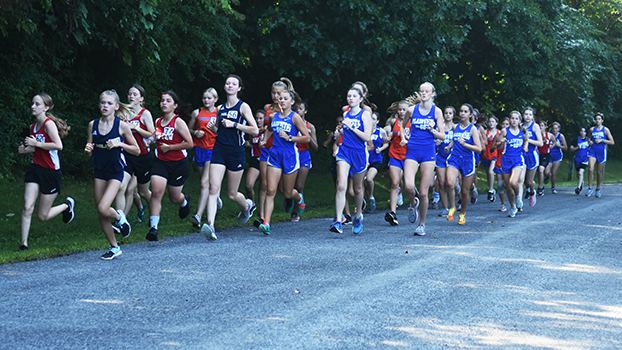 NILES — There is no place like home — just ask the Niles cross country team.

After having been displaced due to COVID-19 restrictions in 2020, the Viking cross country teams hosted their annual stampede at Madeline Bertrand Park Friday morning.

Last season, the stampede had to be moved to Dowagiac due to Niles’ course being too narrow to meet the guidelines for social distancing.

Niles runners Kierstyn Thompson, who finished eighth overall, and Cassandra Shortman, who placed 20th, agreed that it was nice to run on their home course again.

“We trained here a few days before this, but we are definitely glad to be back,” Thompson said.

“Last year, we had to run at the Dowagiac course, but we never got to practice there,” Shortman said. “It was nice to come here and practice before the meet.”

Thompson and Shortman said that being able to stand closer to each other is one of the major differences from last year.

“Everything is more laid back than it was before,” said Thompson.

Veteran Niles Coach Jami Roden was also happy to be back at Madeline Bertrand Park.

“It was nice to be on our home course,” she said. “We had a lot of the coaches tell us they love this course, and their runners like this course, because it is in the shade, and it is a true cross country course. We are happy about that.”

Plainwell won the girls race with 44 points, while Battle Creek Harper Creek was second with 58 and Paw Paw third with 69. Niles and Edwardsburg both finished with 83 points.

Roden was pleased with the times her team put down in the first meet of the year, but was not happy with tying with the Eddies for fourth place.

“We tied for last place, so with that, I am not happy,” she said. “But when I look at the girls’ times, and half of my team this was their first time running at a varsity meet, I am happy with their times. I know there will be improvement.

Mackenzie Hill, of Plainwell, was the overall winner with a time of 21:11.

Harper Creek won the boys title with 30 points. Paw Paw was the runner-up with 49, while Plainwell finished with 61 and Edwardsburg 105. Niles did not have enough runners to post a team score.

Will Leman finished in the top 10 for the Eddies as he was eighth with a time of 19:41.

“Happy to get the first meet under our belt with two new coaches and a young team,” said first-year Edwardsburg Coach Kim Bartz. “Proud of our team’s overall effort today. Freshmen girls stood out with four earning medals out of the top 10 of the freshmen girls. Team veterans Will Leman, Finn Divane, Jessica Ferguson, Macy Andress and Lili Szalia all ran well today. Newcomers Jon Leith and Charlie Drew competed at a level that is sure to help anchor the team in the upcoming season.”

Niles is back in action Tuesday as it travels to Three Rivers for the Big Hill Invitational.

Edwardsburg is off until Aug. 28 when it heads to Mishawaka for the Penn Invitational.