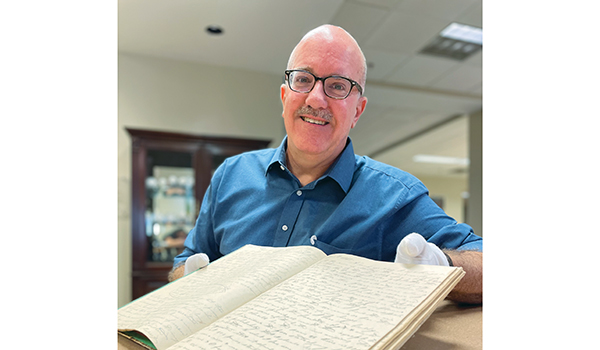 DOWAGIAC — Dowagiac resident Chris Momany did not expect his phone to ring on a quiet day in October 2015.

It was a Friday afternoon, and most students and professors had left for the day at Adrian College, where Momany worked as a chaplain and part-time professor. On the other line was an archivist alerting Momany to the discovery of a journal predating the college’s founding. With the archivist’s permission, Momany took the journal home and discovered it belonged to a 19th Century abolitionist, David Stedman Ingraham.

What Momany did not know at the time is that the phone call and the journal would lead him to a new calling and shape his work for years to come.

“There is this whole involved story behind it to unravel,” he said of the journal, which he now carries of a copy of in his office. “This is a document that was lost of decades, if not more.”

Now, six years later, Momany discusses the moment in his new office located at Dowagiac’s First United Methodist Church, where he serves as pastor. From his desk, Momany said that though he is miles and years removed from that day, he can remember it as though it were yesterday — and its story is far from over.

This December, Momany will be one of 12 international scholars traveling to Benin, West Africa to study the abolitionist’s journal and trace the story back to Benin. Momany is co-leading the project, which is being funded with grants from the Murdock Charitable Trust and the Maclellen Foundation. Upon returning from the trip, Momany will be an editor and co-author for a book detailing the research.

“It’s going to be intense,” Momany said. “I was planning on waiting a few years before trying to write a book on this, but this grant funding became available, and we took it.”

Already, through study of the journal, Momany and other researchers have discovered Ingraham was a close friend and student of Adrian College’s founder Asa Mahan and that he served as a missionary in Jamaica prior to his death. The most notable discovery in the book are detailed drawings taken from a slave ship originating from Benin.

The drawings include specific dimensions of rooms in which kidnapped and enslaved people were kept. According to an excerpt of Ingraham’s journal, on one ship, called Ulysses, a total of 556 enslaved people were crammed into apartments totaling 800 square feet and no more than 2 feet, 5 inches tall. Ingraham described the quarters as “ankle-deep in fifth.”

“As I contemplate the awful suffering that these poor creatures must have endured during a passage of 50 days from the coast of Africa, my soul is in distress,” Ingraham wrote on July 14, 1839.

Momany said Ingraham used his findings from the ship to raise awareness of the horrific conditions enslaved people were exposed to.

“It was documenting an atrocity,” Momany said. “This drawing is very different from others that you might find in history books. It gives us more knowledge of the atrocity of the transatlantic crossing.”

Momany said Ingraham’s journal is an important historical discovery as it sheds light on the African slave trade and conditions enslaved people were subjected to.

Though Ingraham has been dead for more than a century, Momany said he feels called to continue Ingraham’s work raising awareness of the inhumane treatment of people trafficked through the transatlantic slave trade through study of Ingraham’s works.

When visiting Benin from Dec. 2-12, Momany and the other scholars will be visiting local experts and working to honor the 556 kidnapped and enslaved people who were held aboard the Ulysses.

“As much as we found this document, this document found us, and by that, I mean it has this claim on us,” Momany said. “There were 556 people on that ship who were treated as disposable, and they deserve so much more. It’s this moral claim on me. I feel this is my responsibility.”