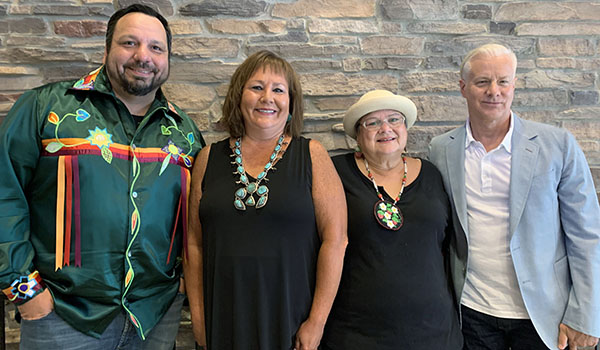 “I’m looking forward to working with members of our Tribal Council and our wonderful staff to pioneer a new path for our people – one that leads to better outcomes for every member of our Nation and ensures our future together,” Richards said. “It’s not lost on me that there’s a new era in politics at all levels of government today where women are in the driver’s seat.  I think this election is a real testament to the notion that women of all colors and creeds are considered seriously as trailblazers.  I’m excited to implement a style of leadership that puts the welfare of all members of our nation first.”

The daughter of Bonnie and Tom Drake, Richards is a third-generation member of the Pokagon Band.  She was raised in Hartford, Michigan and is a 1993 graduate of Western Michigan University in Kalamazoo. Upon graduation from college, Richards moved to Hawaii and worked as an executive for Geico Insurance but returned to Michigan when the Pokagon Band was granted federal recognition in 1994.  Since 1995, she has served as assistant government manager for the Band, leaving for a short stint as a grant manager at the Kellogg Foundation in Kalamazoo before being elected chairwoman.

Morseau, the son of Stan and Linda Morseau, has more than 20 years of experience dedicated to indigenous education, strategic planning, and cultural immersion.  In 2014, Mr. Morseau returned to his ancestral homelands to begin advocating for the indigenous students of Michigan.  In addition to serving as the director of education, Morseau also served as Chairman of the Confederated Michigan Tribal Education Directors and president of the Tribal Education Directors National Assembly.

Topash, father of Lauren, Alex and Emma Topash, brings to Tribal Council an extensive business background. Currently, Topash is a senior vice president at Cleerly, Inc., a startup, new technology company, which provides analysis that identifies, characterizes and quantifies coronary arterial plaques. Topash has 30 years of professional experience in new healthcare technology commercialization and an expertise in U.S. health care reimbursement. Topash possess a bachelor’s degree and master’s degree from the University of Missouri – Columbia campus, where he also resided during his formative years.

Pokagon Elder Warren is 68 years old and is a grandmother of 28.  She has seven adult children and three great grandchildren, with her fourth and fifth grandchildren on the way.  Her beloved son-in-law, Brandon Rapp, is also a current Member At Large on the Pokagon Tribal Council.  Growing up, Warren did everything her mother said she could do, and she completed her bachelor of science in nursing from Valparaiso University.  She was also a member of the Pokagon Band Tribal Council in the 1990s and sat on the Board of Trustees for the housing assistance office for the city of South Bend.