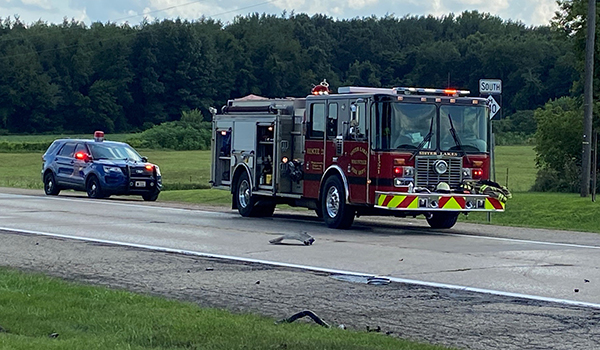 BERRIEN COUNTY — Michigan State Police Niles Post troopers are investigating a three-vehicle fatal crash that occurred just before 4 p.m. Tuesday on M-140 Highway and North Branch Road in Bainbridge Township.  Portions of M-140 were shut down for over three hours.

A 2020 Nissan Sentra was traveling south on M-140 at the same time the Chevy entered the southbound lane, and the two vehicles collided.

The Chevy caught fire, but the driver, and lone occupant, was able to escape the burning car.  The driver of the Chevy was identified as Daniel Essmyer, 25, of Niles. He was transported to Spectrum Health Lakeland with non-life-threatening injuries.

The driver of the Jeep was identified as Frederick Schmalfeldt, 38, of Paw Paw.  He was transported to Spectrum Health Lakeland with unknown injuries.

Seatbelt usage for all occupants is still being determined, according to troopers.

This investigation is ongoing and remains open.