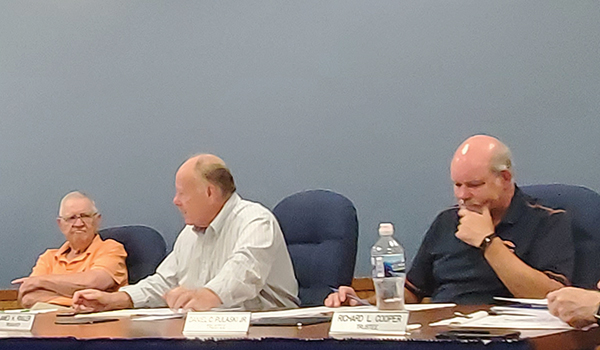 During its regularly scheduled meeting, the Niles Township Board of Trustees voted to approve a $20,000 bid from Brett Crouch Construction to replace and repair sections of sidewalk in the township. The project, which trustees said would be completed by fall, would replace sections of sidewalk on Baldwin, Lewis, Kathryn, Fulkerson, Eastfield, Westfield and Howard streets.

Trustee Herschel Hoese said the project would replace sections of sidewalk deemed a hazard for pedestrians.

“I went through every street and marked each square that needed replacement so that they are safe,” he said. “That means a lot more to me now than it did before. My wife fell on the sidewalk, not in the township, and she has had pretty severe injuries. There are some spots where there is a four- to five-inch difference between one square and another. That’s a real liability to the township to not fix those.”

Hoese said that the $20,000 project would repair most, if not all, majorly damaged squares of sidewalk.

“It will put us in pretty good shape,” he said.

The project was approved unanimously.

Also Monday, the board approved entering into an agreement with Brandywine Community Schools regarding its proposed school resource officer.

The school district is currently seeking to add a resource officer to work in the schools. The officer, who would cost $135,000, would work full time in the school and be trained to handle situations occurring in a school environment. The officer would be a deputy of the Berrien County Sheriff’s Office.

Monday, the township board agreed to cover 30 percent of the cost, which would allow the officer to work in Niles Township at times when school is not in session, such as summer and winter breaks.

Board members and representatives with the Berrien County Sheriff’s Office said utilizing the school resource officer for 30 percent of the year would help cover an understaffed police presence in the township.

Earlier this summer, the sheriff’s office asked the township to add five additional officers to cover the area, which currently has seven officers. The additional officers would cost $830,000, and board members are considering a 2022 millage to support the officers, which they said are needed.

“This is one of those things, where yes, there is a cost to it,” said Treasurer Jim Ringler. “Does the township need it? Yes.”