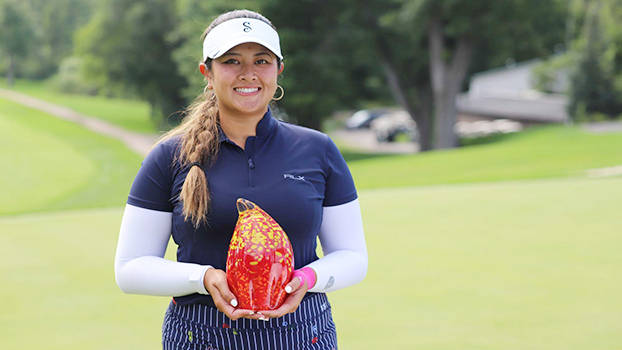 Lilia Vu picked up her third win of the season as she shot 67 Sunday to win the Four Winds Invitational. (Photo courtesy LPGA-Symetra Tour)

SOUTH BEND — A final round 5-under par 67 performance proved to be all it took for Lilia Vu as she secured victory at South Bend Country Club by finishing 12-under par in the Four Winds Invitational.

“I feel really good, definitely played pretty well,” she said. “The course was super difficult today, especially since the greens dried out pretty well. So, we had to really focus on hitting to the front yardage or just short of the pin. I think because it’s Sunday, it’s the last day, there’s nothing to lose. There’s no pressure. You can just try and play your best golf.  So, that’s what I just try to do.”

At University of California, Los Angeles Bruin, Vu (Fountain Valley, California) was the Pac-12 Conference Golfer of the Year just a year before turning professional on the LPGA Tour. While things didn’t work out as planned, she found herself questioning whether she should continue playing golf. Time and time again this season, she credited her mom as her rock to keep her fighting for the game she loves. Sunday was her third win this season, and fifth consecutive top-5 finish.

In addition to winning the 15th tournament of the Symetra Tour season, Vu also won the 2021 Potawatomi Cup and $8,000 in bonus prize money.

The Four Winds Invitational served as the third and final event of the series sponsored by Potawatomi nation tribes for an eighth consecutive year. Before raising some hardware in South Bend, Vu finished tied for 2nd at the FireKeepers Casino Hotel Championship to accumulate 710.75 total points and win over Fernanda Lira (Mexico City, Mexico) with 580 points.

“It means a lot to win the Potawatomi Cup,” Vu said. “I didn’t start out great in Harris, Michigan, so I am super happy to finish well on the last two events. I am also so honored to win the cup, as well as all other players are super grateful for the tribe has allowed us opportunities to earn extra money at Symetra events.”

Race for the Card standings after week 15

Following the 15th tournament of the 2021 Symetra Tour season, the Race for the Card reshuffled and added one new face.

The victory and $30,000 winner’s check helped Vu maintain the No. 1 spot with $140,607 earned through 14 total starts this season. Here is a look at the current top-10 heading into the Circling Raven Championship: