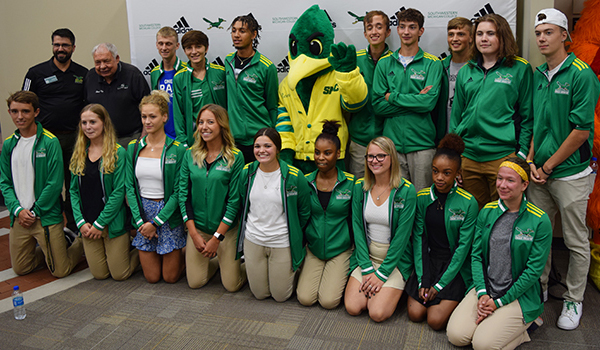 DOWAGIAC — On Aug. 11, Southwestern Michigan College celebrated the return of intercollegiate athletics after 25 years and dedicated the Recruiting Gallery trophy hall as part of an historic evening.

Resplendent in green warm-ups, the men’s and women’s cross country teams, whose inaugural meet Sept. 3 is the Golden Grizzlies Open in Rochester, made their first public appearance.

“This is a situation I’ve been working toward for eight years,” Sartori said. “I’m so thankful for this opportunity.”

“The founders, preceding the vote by taxpayers in support of a local college in November 1964, were determined in their quest to have a college for Cass County and part of Van Buren County,” Board of Trustees Chairman Thomas F. Jerdon said. “Their ambition confounded experts and consultants far and wide. The college was fortunate to have creative administrators in those early years, including Coach Ron Gunn, who first pitched the idea of athletics as a means of recruiting students in December 1967.

“For the next 30 years, athletics was a major factor in our existence,” Jerdon said, “as the Roadrunners garnered 10 national championships and scores of state titles while literally putting SMC on the national map. In my early years as a trustee, I traveled to see the women’s basketball team play in a magical season where we won the 1994 NJCAA championship.

“Much as we were in the late 1960s,” Jerdon said, “we are again in a critical time as a college. While we’re better positioned in terms of facilities, we need to compete for students at a level not seen since those early years. Affordability and a caring environment are our strengths.

“Athletics for us means a pathway for in-district students who have gone elsewhere for the past 25 years to now play here,” Jerdon said. “And, with nearly 400 beds in three residence halls, there’s room to grow beyond district lines. It just makes sense for the college at this time as we continue to find ways to connect students to our excellent academic programs.

“Many athletes came here to play, earned degrees and wound up as successful members of society because we had athletics. I’m glad we’re going to write more stories like those in the years to come. Beyond growing enrollment via athletics, the Board of Trustees has charged the administration with creating a values-driven program that will focus on character development, in-classroom success, community representation and championship-level competition.”

“I recall [predecessor] Dr. [David] Mathews said to me a couple of years ago how important sports were in the Dr. Russ Owen era, 1971-81,” President Dr. Joe Odenwald said. “I tend to think of this season as our coming-full-circle moment as a college. Our challenges 57 years into this endeavor are similar to those at the outset. To quote Adrian College President Dr. Jeffrey Docking, ‘We must get into the mindset of an 18-year-old.’ They want to engage, participate and be part of something bigger than themselves while simultaneously earning a degree. Athletics are a big piece of this puzzle. So are the arts. We’re going to have a pep band and a dance team. We may even have a bass fishing team if someone gives us a boat.”

“None of this vision would be easy or even possible without previous investments made in student housing. If you’re a rural two-year college without housing, your ceiling for growth is very low,” Odenwald said. “We spent considerable time this past year studying colleges in Iowa, Nebraska and Louisiana, looking at enrollment models. It really comes down to a significant number of students playing sports, being in the band, singing in the choir, dancing. That’s how private colleges build their enrollments year after year. We’re different because students need an affordable option where they can pursue activities while getting a quality education. Compare our facilities with anywhere in Michigan. You’ll find they’re better than any of our peers and we’ve renovated them without ever going to taxpayers and asking for special millage. Student-athletes are all we’re missing.”

Vision for the Future

Athletic Director Rodell Davis, who will also coach men’s basketball when it returns in 2022 along with volleyball and wrestling, played Big Ten basketball at the University of Iowa.

“I’ve been coaching for nearly 20 years at different levels — high school, junior college, Division I. I have seven years of athletic director experience at the junior-college level,” Davis said. “I’m a builder. I want to come in, get my hands dirty and make sure I work with each and every one of you every day on whatever I can do to help you on campus or in the community.”

“We want to build a first-class organization, second to none,” Davis said. “Specifically, I want to do three things: 100-percent graduation; if somebody comes and stays for two years, they need to leave with a degree because education is the great equalizer. Two, I want to prepare our young men and women for life after SMC, whether for the workforce or going on to a four-year college. If we build young men and women by giving them what they need academically, socially and athletically, their lives are going to be easier and it’s going to put us on the map in communities as ‘SMC does it right, their young men and women are prepared.’ Third, we want to win with class while we compete for championships. We probably won’t win every year, but we’ll be in the conversation. From a recruiting standpoint, I look for three things: people who represent us well, on and off the court, to set an example and be role models; willing students who go to class prepared every day so they can compete academically; and talent to compete at a high level.”

Odenwald’s fervency drew Davis to SMC, a “hidden gem.” He phoned his wife: “I want to work with the president here. This man is on fire about athletics, and I’m as passionate as he is.” It rained the day Davis interviewed, but “as I drove away, I saw a rainbow in my rearview mirror.”

Tom Ellspermann of St. Joseph, two-time All-American for the 1974 and 1975 cross country champions, ran for Michigan State and went on to a Whirlpool management career — what Davis declared a “champion in life. If our student-athletes use him as a role model, we’re going to have some great young men and women.”

“When I attended, the college had great administrators, professors and enablers who made it fun,” Ellspermann said. “Coach Gunn was an enabler. He helped me become a stronger individual — not just in sports, but in academics, leadership and life.

“Individuals I just met on the 2021 cross country team, what a great opportunity you have to get a great education, with great people to influence you. I was not a star, I was fortunate to be on great teams. I joke that to this day I would recognize my teammates from behind because that’s all I ever saw. What a great staff you have to build this next level the college is after.”

“I was a coach most of my life,” Elspermann said. “I coached people, logistics, systems, marketing and sales. I had the honor when I was a freshman to race at the University of Oregon. I shook hands and got an autograph from Steve Prefontaine, an Olympic star whose life was cut short by an auto accident. I had a poster on my wall my entire business career captioned over one of his race photos, ‘To not give it your best is to sacrifice the gift.’ His gift was running, but it could be mathematics, engineering, construction, any endeavor you go into. This will be a journey, and we will succeed.”