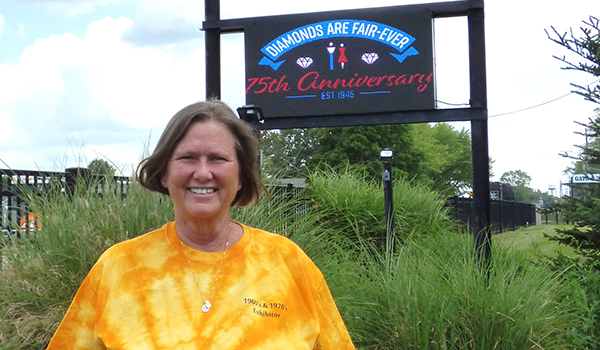 BERRIEN SPRINGS – Berrien County Youth Fair officials, volunteers and exhibitors are ready to celebrate after the COVID-19 pandemic delayed last year’s 75th anniversary “Diamonds Are Fair-Ever” celebration from last year to this year. Fair manager Karen Klug said last week that everything is set to make this year’s fair one to remember.

Klug said everyone is more than ready to have this year’s fair, from the 2,000 or so exhibitors ready to show their animals and still exhibits and more than 1,200 volunteers making sure everything runs smoothly to the food vendors, commercial entities and amusement ride operators all set to welcome families back to the fairgrounds.

“We’re just excited to be able to do it,” she said. “Our entry numbers are down a little from 2019. We still have some people a little bit uncomfortable about coming. We are hoping that most people will want to come out and enjoy the exhibits, eat some fair food and go on the rides.”

“Our focus has always been on the youth of Berrien County and giving them the opportunity to showcase their talents, whether it’s making cookies or showing market steer,” she added.

Although last year’s fair was canceled, fair organizers found other ways to reach out to youth and the community. A youth showcase was hosted last August with 186 youth able to come and show exhibits on a limited basis. They also had four fair food “drive thru” events to raise money and give people the chance to enjoy the fair food they missed.

Marla Calico, the president of the International Association of Fairs and Expositions, will be on hand for the opening of the 1995 time capsule on Monday and will speak after the ceremony in the “Somewhere in Time” (formerly the Historical) Building. State Sen. Kim LaSata will also be there to present a proclamation signed by state officials.

Other 75th anniversary events scheduled include the sale of special decades T-shirts and special exhibits and programs inside the “Somewhere in Time” Building on the fairgrounds.  There are six living past fair board presidents who will be speaking during week with those times available on the fair’s website, bcyf.org.

The week will end with Thursday for those from the 2000s and 2010s wearing their sky blue shirts and Friday for those exhibitors from 2020 and 2021 wearing their sapphire blue shirts. Everyone is invited to wear their t-shirts again on Saturday when a group photo will be taken in the horse arena after the parade of champions.

Besides giving area youth a chance to exhibit and families a chance to get out and celebrate once again, Klug said hosting this year’s fair will let them make up financially for last year.

“We had some maintenance projects scheduled for 2020 that couldn’t happen,” she said. “We hope to catch up and make plans for 2022 and beyond.”