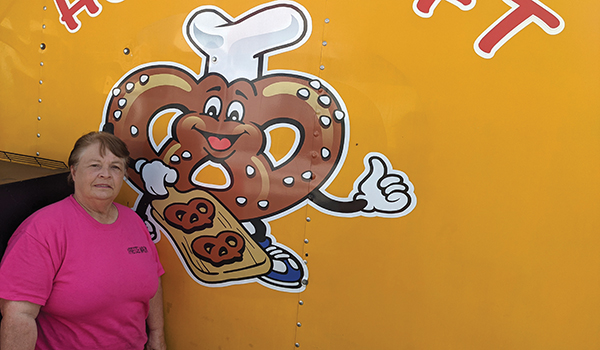 BERRIEN SPRINGS — The booming voice of the grandstand announcer and the sounds of bustling fairgoers will soon be returning to the Berrien County fairgrounds in Berrien Springs.

After a one-year hiatus, the Berrien County Youth Fair will be making its return Monday, Aug. 16 for its 75th anniversary.

The fair’s return is music to Rhonda Miller’s ears. A food vendor for more than 20 years, the Constantine resident is glad to be managing The Pretzel Wagon once again.

“It’s been crazy [this season],” Miller said. “The number [of customers] has pretty much doubled.”

Like many in the food vending industry, the absence of fairs last year put Miller’s business in a state of limbo.

“We pretty much did nothing aside from a couple of drive thrus,” Miller said. “Other than that, we were like everyone else, just sitting at home.”

The return of fair season has been a family reunion of sorts for Miller.

For Miller, it is the people who keep her coming back year after year making pretzels for fairgoers.

“They will come over and talk with me and catch up,” she said. “We hit all the high spots and low spots. It’s all about getting back and seeing your friends. After 21 years, I have a lot of them around here.”

Shayne Odle is hoping his business will make its BCYF debut next week.

Odle, co-owner of Niles-based mobile bakery Rum Sweets with his wife, Ashley, said his business is currently on the waiting list for vendors. Rum Sweets offers a variety of sweets including cheesecakes, cupcakes, petite cakes, cookies and more.

While the height of the pandemic last year meant vendors across Michiana were temporarily out of business, that period allowed the Odles to get their business up to speed and ready for fair and festival season.

“It was a nightmare,” Odle recalled. “But it gave us the time to really dedicate ourselves here and not really be worried about trying to get this out, being marketable and bringing in income and everything. We really needed that six months, and when January came around, we finally had everything finalized.”

“It was a little slow and chaotic,” he said. “But it’s still nice. A lot of long hours, but still nice. We were able to at least put our name out there, which is big.”